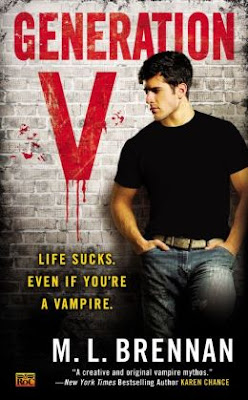 Generation V takes on yet another look at what it means to be a vampire in a human world. Our lead character is 26 year old Fortitude Scott who is more human than a vampire and that is absolutely fine with him considering who is family is and how they feel about humans in general and especially about him since he's so much different from the rest of his family.

His brother is named Chivalry, and his sister is named Prudence. I actually got to the point of liking Chiv when he became somewhat protective of his little brother when he was out putting his life on the line to help people nobody else would. He's also got a human wife, Bhumika, who knows exactly what Chiv is, and stays with him anyway. I really didn't much care for Prudence. She was seriously cold, unemotional, unfeeling, and really didn't care if Fort lived or not. Madeline, the so called mother of this eclectic group, is very old, very powerful, and was responsible for the creation of Fortitude. More on that later.

When we are first introduced to Fort, we're told that he has a degree in Film History which is about as worthless a degree you can have in this economy. His current job is slaving at Busy Bean's while trying to deal with a cheating bitch for a girlfriend Beth, and a roommate who is so far behind on his rent that Fort really doesn't believe he will ever see a dime of the money he is owed.

Fort ended up growing on me in the end, but at first I was really wanting to slug him and tell him to quit the freaking bitching and moaning like a little girl. Reviewers would call Fort EMO. NOBODY told him to go to college for a worthless degree. The entire situation with Beth was just plain nuts! Anyone else would have dumped her to the curb and be done with it.

I truly believe the most interesting, enjoyable, and awesome character in Generation V was Suzume Hollis who is a Kitsume fox shifter. Loved Suzume. Loved her continued nagging and pushing of Fort. Loved how she put people into in a funk with her constant teasing. Loved what she did to both Beth and Fort's roommate in the end, and I especially loved how she put her life on the line for Fort when he went after the bad vampire who went off the reservation as it were. I even liked that even though there wasn't any romance per se in Generation V, there is definitely the feeling of a pending relationship between Fort and Suzume.

Obviously, with this being the first book in a new series, there's a bit of world building and  information dumping so that the reader can understand why Fort really didn't want to transition to a full vampire and lose any and all humanity that has remaining. The whole idea that vampires are not really immortal and can basically die just like humans can, was appealing to me. I also found the creation of new vampires to be highly, well, creative in nature especially knowing that Fort is a different kind of vampire which I'm hoping to find out more about as the series continues.

I think another character we will definitely be seeing a lot more of is Matt McMahon, a Private Investigator who has never believed the story behind Fort's parents murders. He may be old, but he doesn't really let sleeping dogs lie. It will be interesting if there's a confrontation between Matt and Madeline.

Overall, this ended up being a better read than I thought when I started the book. I'm sure there will be opinions and commentary all over the place about Fort, about Suzume, and the rest of the characters. Me, I'll be waiting patiently to see what Brennan has in store next. I also liked the fact that Brennan introduces a male character into the female dominated Urban Fantasy genre. It's a nice change of pace.