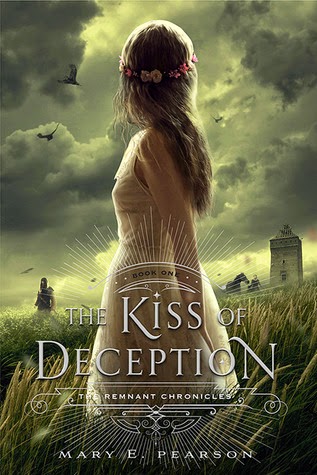 **I received this book from NetGalley in exchange for an honest review. This does not affect my opinion of the book or the content of my review.**

In a society steeped in tradition, Princess Lia’s life follows a preordained course. As First Daughter, she is expected to have the revered gift of sight—but she doesn’t—and she knows her parents are perpetrating a sham when they arrange her marriage to secure an alliance with a neighboring kingdom—to a prince she has never met.On the morning of her wedding, Lia flees to a distant village. She settles into a new life, hopeful when two mysterious and handsome strangers arrive—and unaware that one is the jilted prince and the other an assassin sent to kill her. Deception abounds, and Lia finds herself on the brink of unlocking perilous secrets—even as she finds herself falling in love.

The Kiss of Deception is the first novel in The Remnant Chronicles trilogy. Mary Pearson has written a novel that tells the story from several different points of view including Morrighan Princess Arabella (Lia), "Rafe", and Kaden.

The story beings just like the synopsis says. Lia, unwilling to be a participant in an arranged marriage to a prince that she knows nothing about and failed to respond to her request to meet first, runs away with her hand maiden Pauline to a remote village of Terravin. There, Lia takes up several jobs including barmaid. She truly wants to find someone to love in her own way, and not be forced into accepting a life that others have chosen for her. Unfortunately for Lia, there are numerous outside forces that really don't much care what Lia wants.

Each character in The Kiss of Deception has their own faults, and yes, charms that drove the story. While I wasn't exactly impressed with Lia's decisions or choices at the beginning of the story, she slowly chipped away at my cold heart until I was left curious as to what Pearson has up her sleeves next for her. I absolutely adored Lia's determination, grit, and strength by the time I got to the end of the story. The more you learn of Lia's difficulties and struggles she faced at home, the more I agreed with her decision to run away.

Normally in high fantasy, there's a bit of romance that is just enough to satisfy my curiosity, without making me skip ahead. As an individual who loathes 3-way love triangles with a passion, I was a bit leary about how Pearson would pull it off so that I didn't tear my hair out of my head. I have to say, the 3-way is not your normal romance. This "triangle" actually works in a twisted sort of way which, yes, surprises me.

I really do prefer "Rafe" to "Kaden" even though both were deeply involved in deception, and keeping their real identities hidden from Lia until later in the story. Rafe, to me, is a fated soul, while Kaden is trying to overcome his feelings for Lia. If you read between the lines, you knew Rafe was curious and perhaps a bit jealous that Lia ran away instead of accepting her fate. Rafe's determination to find Lia against extreme odds, ends with a definite connection that I hope doesn't get thrown away for Kaden's sake.

High fantasy is awesome at creating an entire new world that stretches our imaginations, and doesn't skip the fact that these kingdoms are far away. The Kiss of Deception remains true in that regards. A large part of the storyline involves traveling for days, or months at a time, and there are challenges along the way. Lia is forced into traveling a very large distance away from her home, and along the way, the ability to survive against brutal weather, barbarians who want to see her dead, and strange creatures that appear along her journey, makes her story more compelling to follow.

There are characters in The Kiss of Deception that I adored like Pauline and Berdy, while loathing a whole slew of others because they are just plain evil in nature. I, personally, do not like rage acts of violence against any women. I do understand that fantasy is just that, fantasy and not real life. It still annoys and puzzles me that we are still required to deal with harsh scenes where a character suffers from abuse, or rape.