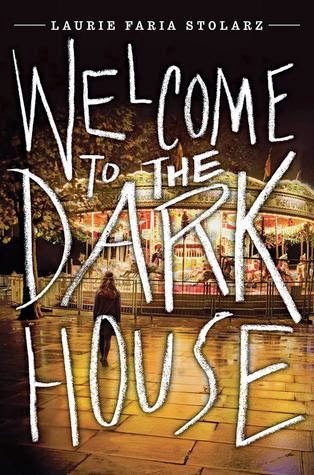 **I received this book from Netgalley / Disney-Hyperion in exchange for an honest review. This does not affect my opinion of the book or the content of my review.**

What’s your worst nightmare?For Ivy Jensen, it’s the eyes of a killer that haunt her nights. For Parker Bradley, it’s bloodthirsty sea serpents that slither in his dreams.And for seven essay contestants, it’s their worst nightmares that win them an exclusive, behind-the-scenes look at director Justin Blake’s latest, confidential project. Ivy doesn’t even like scary movies, but she’s ready to face her real-world fears. Parker’s sympathetic words and perfect smile help keep her spirits up. . . at least for now.Not everyone is so charming, though. Horror-film fanatic Garth Vader wants to stir up trouble. It’s bad enough he has to stay in the middle of nowhere with this group—the girl who locks herself in her room; the know-it-all roommate; “Mister Sensitive”; and the one who’s too cheery for her own good. Someone has to make things interesting.Except, things are already a little weird. The hostess is a serial-killer look-alike, the dream-stealing Nightmare Elf is lurking about, and the seventh member of the group is missing.By the time Ivy and Parker realize what’s really at stake, it’s too late to wake up and run.

Welcome to the Dark House is apparently the first book in the Dark House series by Laurie Faria Stolarz and that's a good thing since there are plenty of questions, and not enough answers to go around. You could say that this story gives readers a chance to understand the writer, and her world building, and then decide whether or not they will continue to the next installment.

The premise to Dark House was absolutely interesting enough for me to request the title from Disney-Hyperion, and to read it right to the very end. I would imagine that fans of horror movies, and reality TV shows, will find this story entertaining as well as compelling. The horror aspects, once revealed, gave me the chills, and goosebumps, and no way in hell would I ever think about doing anything like this...EVER!

Seven are chosen out of thousands of applicants. They are told that they will have the same chance to meet director Justin Blake who has produced some memorable horror movies over the years. The chosen have all sent in essays explaining why they should be picked and explaining their worst nightmares. The chosen will all have to face the ultimate test of a lifetime with hopes of seeing the secretive movie that Blake is working on.

If you were a horror fan, would YOU send in your essay in hopes of being picked for the show, and meeting your favorite director? If this was the only way for you to get over nightmares that have haunted and plagued you for years, would you attempt to join in on the fun even though you are a novice when it comes to understanding the multitudes of characters that Blake has created?

Eighteen year old Ivy Jensen gets the most "air" time as it were. We know what happened to her family six years ago. We know about her likes are, and the fact that she's not necessarily a fan of horror movies. Ivy isn't necessarily a kick ass character, or one that you would necessarily connect to if you were to follow her every move throughout the story. The one thing that Ivy is, however, is a survivor who saw too much at such an early age. She sees an opportunity to face her fears and ends of part of the Dark House with hopes of understanding the person responsible for haunting her.

A large majority of those chosen (Natalie, Shayla, Parker, Garth & Frankie) are Justin Blake fanatics. They can name all the villainous characters like they were members of their own families. They come from all walks of life, and have their own unimaginable nightmares to deal with. In the end, the characters that stand out for me besides Ivy, are Parker, and Natalie.

There is a mystery character named Taylor who I haven't mentioned until now. Taylor only appears briefly, and only then to warn the group when it's already too late. We know absolutely nothing about her, except that her essay appears at the end of this story, and that apparently she did arrive at the same time as the others. Where did she come from, and where did she go exactly? Was she part of a previous installment of the Dark House? Is she part of the Dark House creators? Inquiring minds demand to know!

Welcome to the Dark House alternatives stories between six of the characters but you really have to pay attention to the breaks since there is absolutely no formatting to be found anywhere. Perhaps the book, now released, will prove to be better with chapter breaks clearly marked. With my edition, the breaks were capitalized, and therefore the only warning that the POV was changing. I truly believe in keeping notes while reading. It made things easier for me to guess who was actually speaking next. There were times that I really couldn't separate the characters voices from the other. Hoping this improves in the sequel.

I am also hoping that Stolarz will eventually reveal who the clever geniuses are who created the Dark House. How many people are actually involved? Are the drivers involved? Is the director ultimately involved or someone more clever and devious? Are there some otherworldly characters running the entire thing? One obviously needs patience in order to get to the bulk of these questions.