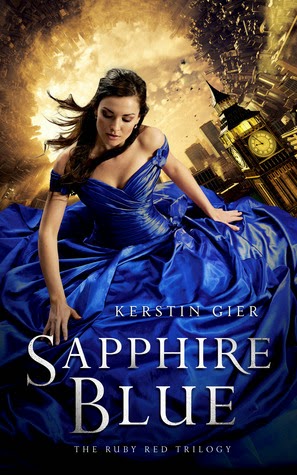 
Gwen’s life has been a rollercoaster since she discovered she was the Ruby, the final member of the secret time-traveling Circle of Twelve. In between searching through history for the other time-travelers and asking for a bit of their blood (gross!), she’s been trying to figure out what all the mysteries and prophecies surrounding the Circle really mean.    At least Gwen has plenty of help. Her best friend Lesley follows every lead diligently on the Internet. James the ghost teaches Gwen how to fit in at an eighteenth century party. And Xemerius, the gargoyle demon who has been following Gwen since he caught her kissing Gideon in a church, offers advice on everything. Oh, yes. And of course there is Gideon, the Diamond. One minute he’s very warm indeed; the next he’s freezing cold. Gwen’s not sure what’s going on there, but she’s pretty much destined to find out.

Sapphire Blue is the second installment in the Precious Stone Trilogy and the story picks up right where Ruby Red left off. For 16-year old Gwyneth (Gwen) Shepard, things haven't exactly been a piece of cake lately. She's found out that she not only has the time traveling gene, but she's also the Ruby and the last member of the Circle of Twelve. On top of that, her mother Grace lied about her actual birth to protect her from dangerous men, she's had no formal training because that all went to her cousin Charlotte, and the Guardians haven't exactly been friendly towards her.

Thanks to her best friend Lesley Hay, Gwen is slowly learning things that she wasn't taught, and maybe by the end of this trilogy, she will know enough to keep from hurting anyone. James, the ghost from school, continues to teaches Gwen eighteenth century culture, including dancing, and sword fighting. Thanks to the arrival of Xemerius, a demon gargoyle who she meets while kissing Gideon in a church, Gwen gets yet another friend and helper to keep her informed and not out on the cold.

I think the best parts of this story for me were the arrival of Xemerius, Gwen meeting her grandfather in the past, and Lesley's refusal of letting Gwen walk into harm, or travel back in time without moral and informational support. I do so enjoy the time traveling aspects of this series, and the dangerous men who await them at every turn. But, I do wish there was more of Gwen exploring the different era's she travels to. I also know that there is a long way to go before the final page is turned, and the mystery and series is wrapped up.

I will say that I am a bit disappointed with Sapphire Blue and the reason why is that 50 percent of the book was spent dealing with Gwen's angst and feelings for Gideon, or sitting in a cellar elapsing, then coming to terms with the reality that not everything is as it seems. I'm still kind of confused about Gwen's being the raven of the prophecy, and about her closing the circle. But I'm getting closer to understanding why the Count is a huge factor.

Positive(s) and Negative(s) continued: I loved Xemerius, Lesley, Lucas Montrose, and Gwen's brother and sister, who keep things lively and fun. I still have no love for the Guardians, or the Count himself, or most of Gwen's living family, most especially Charlotte and her mother. Not enough of Paul and Lucy for me, but what there was of them, makes me think that the third book will finally answer some of my questions. Gideon, please either get your stuff together, or exit stage left! You irritated me so much in this book, that I wanted to scream like a wild banshee in agony.

Sapphire Blue ends on an interesting cliffhanger, and I am curious to see how Emerald Green picks up and closes out the trilogy. I truly do hope that we can see a much stronger Gwen in the sequel, and not let her emotions dictate her life, or her actions. I want to see Gwen stand up on her own two feet, and finally push the Guardians off their high horses. All in all, Sapphire Blue is weaker than Ruby Red. There is less action, and more puzzling nonsense. But, not enough to leave this trilogy unfinished.