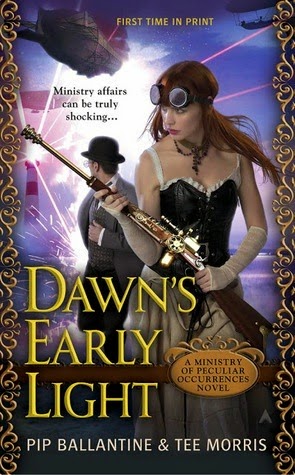 Working for the Ministry of Peculiar Occurrences, one sees innumerable technological wonders. But even veteran agents Braun and Books are unprepared for what the electrifying future holds…


After being ignominiously shipped out of England following their participation in the Janus affair, Braun and Books are ready to prove their worth as agents. But what starts as a simple mission in the States—intended to keep them out of trouble—suddenly turns into a scandalous and convoluted case that has connections reaching as far as Her Majesty the Queen.
Even with the help of two American agents from the Office of the Supernatural and the Metaphysical, Braun and Books have their work cut out for them as their chief suspect in a rash of nautical and aerial disasters is none other than Thomas Edison. Between the fantastic electric machines of Edison, the eccentricities of MoPO consultant Nikola Tesla, and the mysterious machinations of a new threat known only as the Maestro, they may find themselves in far worse danger than they ever have been in before…

Dawn's Early Light is the third installment in the Ministry of Peculiar Occurrences by Pip Ballantine and Tee Morris. The story begins where The Janus Affair left off. Doctor Basil Sound, director of MPO, sends reinstated agent Eliza Braun, along with newly promoted agent Wellington Books, to America where they are supposed to help the Office of the Supernatural and the Metaphysical find out why ocean and air ships are disappearing off the coast of the Outer Banks. But, if you know anything about these characters, and writers, you know that nothing is that simple.

Right from the start, Eliza chases a would be thief on their transportation to America, while underneath it all, she has some issues with Welly's nonchalance about the kiss that took place in The Janus Affair. Sadly, this issue takes up a rather large portion of the story, when it could have been dealt with in a matter of moments. Eliza and Welly team up with Head Librarian Felicity Lovelace, and Wild Bill Wheatley, who Eliza has a grudge against from a previous mission.

As they scramble to stop the House of Usher, and inventor Thomas Edison from unleashing a deadly weapon on unsuspecting citizens, they leave behind a destructive path that takes them from North Carolina, to Detroit, to Arizona, and ending up in San Francisco. Along the way, they not only meet Thomas Edison and uncover his plans, but also Henry Ford, and Nikola Tesla who have their own issues with Edison.

Dawn's Early Light is such a wild, wild ride especially with Welly's new steam powered vehicle, the newest weapons that are on display, Eliza's spunk, determination, and sass, and Welly's new found status as an agent. I also found myself actually liking the possibility of Eliza and Wild Bill for a minute or two, but quickly tossed it out the window when my senses came back to me. I do believe that things are becoming much clearer now as to the House of Usher's intentions, the mystery behind who the Maestro is, and why the House of Usher is so focused on Wellington Thornhill Books, Esquire.

Felicity and Wild Bill are surprisingly characters and definitely a nice, albeit brief addition to the series. There are several other characters worthy of mention. The first is Van Sommerset, a bounty hunter/female priest sent to collect Welly. The second should be familiar to fans of this series. Sophia del Morte who has her very own storyline involving a member of the royal family, and the fact that she still works for the Maestro.

Dawn's Early Light isn't shy on the action, surprising twists, revelations, dangers, romance, or the shocking ending that leads into the fourth installment. Luckily, I don't have to hang around long to read The Diamond Conspiracy (Ministry of Peculiar Occurrences #4) because I am set to do a review/blog tour stop on April 1, 2015!