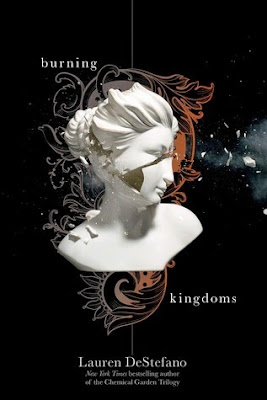 After escaping Internment, Morgan and her fellow fugitives land on the ground to finally learn about the world beneath their floating island home.
The ground is a strange place where water falls from the sky as snow, and people watch moving pictures and visit speakeasies. A place where families can have as many children as they want, their dead are buried in vast gardens of bodies, and Internment is the feature of an amusement park.
It is also a land at war.
Everyone who fled Internment had their own reasons to escape their corrupt haven, but now they’re caught under the watchful eye of another king who wants to dominate his world. They may have made it to the ground, but have they dragged Internment with them?

Burning Kingdoms is the sequel to Perfect Ruin. Morgan Stockhour and her band of rebels from Internment have miraculously made it to the ground in their flying monstrosity. They are immediately brought to the home of the King's adviser Jack Piper, and his five children who quickly become part of the story; especially Nimble and Birdie. This is a strange land called Havalais that is surrounded by water. It's a land where you are likely to find a mermaid, step into a silent movie theater, grab a drink from a speakeasy, or take in the view of Internment through telescopes at the amusement park. It is also a land that is deep into war between two kings not like their own king they left behind.

Morgan has always been a dreamer. She's dreamed about what it would like to be on the ground. She has the desire to do good by everyone she meets. She is sometimes curious, sometimes careless. Finally given the chance to see what the ground is really like, she finds that the grass isn't necessarily greener on the other side. What Morgan and crew find alters their opinions about fleeing their home. There are so many differences, including the food, the way people pray and dress, how they marry, and how they have children without anyone telling them how many they can have. When a major secret is let out of the bag, they also become pawns in the war between cities.

I do think this book was much slower than Perfect Ruin. Perhaps it was intentional on DeStefano's part. Perhaps it was her intention to give Morgan new challenges, and see what happens when everyone else around her starts rethinking their decision about leaving Internment. Throw in Pen's moods and strange behavior that frays the relationship between best friends; Morgan's own unresolved anger towards her brother Lex; issues with Judas and Amy, and Princess Celeste's actual reasoning for tagging along with the rebels. This leads to a story that is less action packed, and more of a mind bender.

What's worse is that DeStefano has once again created a situation where Morgan now must make up her mind between being with her betrothed Basil, or someone else entirely. She must find a way to allow Morgan to grow up as a character, while letting the rest of her cast do their own thing. She must work through new alliances that have shifted and twisted, friendships that have been nearly broken, and friendships that have blossomed between Morgan and Celeste and Birdie.

Once again, DeStefano leaves the story in a very strange place. The plot consists mostly of talking and bemoaning the differences between Internment and the ground. Burning Kingdoms falls into the class reviewers call a bridge book. There's plenty of time for contemplation, and some serious revelations that affect key characters, but nothing is resolved. Then, there is the whopping cliffhanger ending that leaves EVERYTHING up in the air.

**I received this book for free from (Simon & Schuster Books for Young Readers) via (Edelweiss) in exchange for an honest review. Thank you!! This does not affect my opinion of the book or the content of my review.**