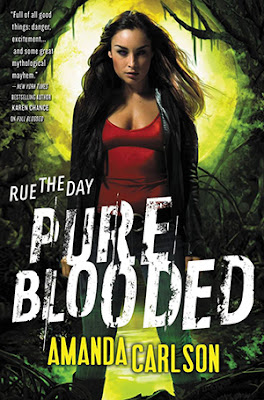 Jessica arrives back from the Underworld to find her father embroiled in a battle against the Made wolves. She and her crew drop everything to join them.

Once she arrives, the threat is after her. Jessica is lured into danger when her adversary takes something precious from her. With help from an unlikely source, Jessica goes up against her creator in a battle that will decide the path of everyone involved. She must war against a new set of foes, ones who could not only steal her power, but could take her soul as well.

Pure Blooded is the fifth installment in the Jessica McClain series. Jessica went to hell and back to rescue her brother Tyler in Red Blooded. She came back more powerful than when she left. But, in the process, she also made yet another powerful enemy with her actions. Trying to put her Underworld adventure behind her, Jessica now has one real objective; finding her father who has been in the Everglades battling rogue werewolves and the priestess who controls them. So, off we go to the Everglades!

The Everglades is a fun place to visit and is full of surprises. You never know when your plane is going to go down en route or you end up getting attacked by man eating PYTHONS, ALLIGATORS and a GODDESS who would love to get her hands on Jessica. OH, NO! Whatever shall we do? If you are Jessica, you charge ahead while kicking ass and taking names. You collect a group of awesome supernaturals to surround yourself with to help you survive because boy do you make some silly mistakes. This group now includes Rourke, Naomi, Marcy, Tyler, Danny, Ray, and Nick as well as two other characters I'm not sure if they are to become regulars, or just guests.

Usually Jessica has more than one challenger to her crown. That doesn't really change in this installment, especially since she's tipped Fate's scales and boy is she pissed. But, something weird happens in Pure Blooded. Answers! There's a surprising revelation about Jessica, her wolf, and a secondary character who has been helping and supporting her all along. The identity of which I will not spoil. There is also the first appearance of a character that belongs to the Coalition. He is supposed to be supporting Jessica since her job is now Enforcer for the Coalition.

After Five books in this series, we know that Jessica, as the only female werewolf, is something special. Has been since the day she finally shifted into her wolf form. But, she still has no idea what she and her wolf are capable of. She's still got a whole lot of enemies who scheme to bring her down before she can take her place as part of the Coalition. I won't say that this story is action packed, but it doesn't lack for it and there are finally some scenes between Roarke and Jessica which have been missing. It's always fun with Jessica and her gang. You never know what is going to happen next, or how her wolf is going to remain quiet while Jessica is trying to retain a bit of her humanity.

What happens next is a good question. With Marcy's aunt Tally missing, along with her witches, does that mean the story will switch to Italy? Are we ever going to learn about the rest of the so called Coalition, or the final 4 members who will be called? I do appreciate that Marcy had a whole lot of story time. She has always been that one person in the background who although she's Jessica's best friend, hasn't had a whole lot of real world experiences. I find it hilarious that Carlson is on the brink of creating new couples. First there was Jessica and Roarke, then Marcy and James, now it's Naomi and Danny's turn. Wondering when it's going to be Tyler's turn to find his mate.

**I received this book for free from (Orbit) via (NetGalley) in exchange for an honest review. This does not affect my opinion of the book or the content of my review.**