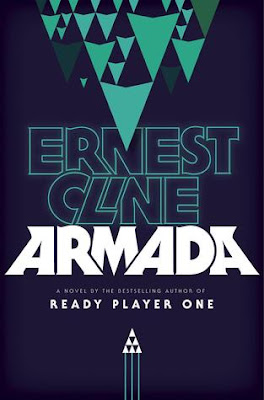 Zack Lightman has spent his life dreaming. Dreaming that the real world could be a little more like the countless science-fiction books, movies, and videogames he’s spent his life consuming. Dreaming that one day, some fantastic, world-altering event will shatter the monotony of his humdrum existence and whisk him off on some grand space-faring adventure.  But hey, there’s nothing wrong with a little escapism, right? After all, Zack tells himself, he knows the difference between fantasy and reality. He knows that here in the real world, aimless teenage gamers with anger issues don’t get chosen to save the universe.  And then he sees the flying saucer.  Even stranger, the alien ship he’s staring at is straight out of the videogame he plays every night, a hugely popular online flight simulator called Armada—in which gamers just happen to be protecting the earth from alien invaders.   No, Zack hasn’t lost his mind. As impossible as it seems, what he’s seeing is all too real. And his skills—as well as those of millions of gamers across the world—are going to be needed to save the earth from what’s about to befall it.  It’s Zack’s chance, at last, to play the hero. But even through the terror and exhilaration, he can’t help thinking back to all those science-fiction stories he grew up with, and wondering: Doesn’t something about this scenario seem a little…familiar?  At once gleefully embracing and brilliantly subverting science-fiction conventions as only Ernest Cline could, Armada is a rollicking, surprising thriller, a classic coming of age adventure, and an alien invasion tale like nothing you’ve ever read before—one whose every page is infused with the pop-culture savvy that has helped make Ready Player One a phenomenon.

Armada, by Ernest Cline, is the authors homage to all of the science fiction movies and video games that I grew up on. If you've ever watched the movie The Last Starfigther (1984), Ender's Game, or played the video game Space Invaders, which I have, then you will love this story. 18 year old Zackary Lightman loves to daydream. He loves watching science fiction movies with his best friends Cruz and Diehl, and even his mother! Even better, he is one of the top 10 pilots world wide in a game called Armada, where Zack and his friends fight against alien invaders via drones.

Little does he know that the Armada game is actually testing grounds for pilots who have the skill set necessary to actually fight against real alien invaders. *Note* This is the Last Starfighter equivalent*  This comes to light after Zack sees what appears to be a REAL alien ship doing maneuvers in his hometown. But that can't be possible since Glaive fighters are only in his favorite first-person space combat flight sim MMO Armada! Shortly thereafter, Zack is spirited away by his friend and boss Ray, and sworn in as a Lieutenant in the Earth Defense Alliance along with others from around the globe.

According to the EDA, the aliens are in fact, real, and Zack and others are on the front lines of a battle that goes back decades. Zack is not unlike the character (Doug Masters) from Iron Eagle. He loves to play his music loudly when he is behind the controls. He is cocky, ballsy, has an attitude, and makes some pretty dumb ass mistakes which he ends up getting away with. But, he is also one of the best drone planets on the planet which gives him a bit of rope to hang himself.

So, let me say that I have not read Ready Player One, therefore there will be no comparisons made by me between the two books. Perhaps one day I will read RPO, but until then, onward and upward! Except for the ending that left me wanting to scream, some really cheesy male bonding time over stupid jokes, and wondering why Cline would end a story in that matter, the book was rather fun to read. I loved Zack's mother Pamela who is a gamer. I didn't like what they did with Zack's father. To me, and others I know, it just didn't make any sense whatsoever to twist this story in that way, and then just drop the hammer like, oh hell, no biggie!

I supposed I should talk about the itsy bitsy teeny romantic possibility that can perhaps be expanded on had the author not jumped from a major battle, into sending Zack and others to the moon, to a wild finish after Zack discovers something is absolutely not right with what is happening to him, and the others. I really LOVED Alexis (Lex) Larkin. She's a fantastic character, and the author doesn't hold her back when it comes to being an geek extraordinaire.

Can't trust that Armada is a standalone. Sorry, I just can't. I've been burned too many times to trust that Cline won't come back and introduce the real faces of the aliens Zack meets in the book. Now that the world's eyes have been opened to new alien races, why stop here? Why not let Zack and maybe Alex go exploring as Earth Ambassadors?

"I received this book from Blogging for Books for this review."