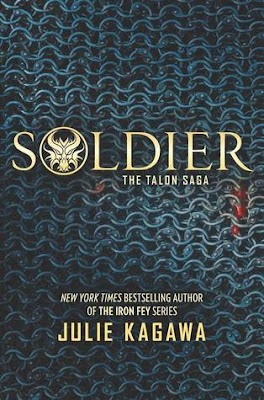 A fighter dedicated to saving humankind from dragons in strictest secrecy.

That was what Garret Xavier Sebastian thought he was part of as a soldier of the Order of St. George. What he learned from a fiery dragon hatchling twisted all he believed in and set him on a collision course with certain death-but not without a chance to put things right.

Betrayed and on the run again, Ember and rogue dragon Riley discover an unthinkable truth about Talon and St. George. They'll need Garret's skills and insider knowledge of the Order to negotiate an impossible deal-and if they fail, there will be no way to stop all-out war.

Soldier is the third installment in The Talon Saga by author Julie Kagawa. As with the previous installments Talon and Rogue, Kagawa once again weaves her story between FOUR main characters: 16-year old Ember Hill (Hatchling/Rogue Dragon), 17-year old Garret Xavier Sebastian (Ex-Dragon Hunter Traitor to the St. George Order), Rogue Talon Operative Riley/Cobalt who has been fighting Talon and attempting to save rogue, hatchlings, and any other dragon who wants out from Talon, and Dante Hill, Ember's twin brother who has become completely brainwashed by Talon.

Right out of the starting gate, Kagawa does something a bit different. She has Garret take the lead. She not only flashes back to how he became the Perfect Soldier, and how he lost his family, but pushes forward into dark and deadly territory which will have startling consequences and change the direction of this series. Garret has always been one of the more interesting characters in this entire series, regardless of the whole Ember/Riley/Garret angst ridden silliness. He found himself trained as a soldier and quickly become a pawn in a much larger game between the Order of St. George, and the evil spawn dragons of Talon.

But, he never imagined his world would be rocked by falling for Ember Hill, who it turned out, was a dragon hiding in plain sight. A Dragon he was supposed to kill, but didn't. He could never image betraying is fellow soldiers, including his partner Tristan. He could never imagine what he would find in London, either. Everything that he was told in the past about the Order vs Talon, has quickly come unglued. When a deadly secret is revealed, Garret finds himself with an unlikely ally in Chinese Dragon Jade, and he soon finds himself racing back home to once again help save Ember, Wes, and Riley.

Ember has had a whole lot of unwanted kimchee tossed on her plate since she choose to go rogue with Riley. From being training by Lilith to become a Viper/Assassin, to leaving her brainwashed brother Dante behind at the mercy of Talon, to finding a connection to not only a human who worked for the so called enemy, to apparently finding her soul mate for life, Ember hasn't had a chance to take a deep breath. Ember's heart is spinning is several directions at once which makes for some interesting choices.

Ember, who struggles with her human & dragon sides, is in a dark place since Garret left. She and Riley continue to try to remain one step ahead of both the Order and Talon, but have no clue how they are finding Riley's underground so quickly. She's had to do things that has splintered her heart into pieces, but at the same time, has saved her life. One could do a paper on Ember who nearly looses herself while being immersed in a really dark place. I have had some issues with the whole Riley/Ember merry-go-round romance. Unfortunately, this is entirely typical for a book written by Julie Kagawa.

I'm going to skip over Riley and go directly for Dante. I'm doing so because Riley, even though he means well, hasn't been one of my favorites and I truly believe his issues will have dire consequences when all is said and done.

Dante is a general tool, and that's saying a whole lot. He's thrown himself on a grenade called Talon, and continues to blame his sister for everything that has happened to him. It's all HER fault that he choose to follow the evil sadistic bastards of Talon, instead of listening to common sense. So, readers shouldn't be shocked or disturbed by anything that happens to Dante and his interactions with the Talon hierarchy. With an author like Kagawa around, you just know that you are about to be shot through the heart with a poisonous arrow.

So, why the rating then you ask? Simple. The ending that is just brutal in every way imaginable. I realize that there will be two more books in this series, but holy mother of Murgatroyd! I won't even dare guess what was in the authors sick/twisted mind at the time she was writing this book. We all know that Kagawa has written some very imaginary & entertaining books over the years. We know that she tends to put her characters through a living hell while laughing like a lunatic. But, I'm not sure what she was going for in this instance. Was it the shock and awe factor? Or, does she not care that she might give someone a bloody heart attack?