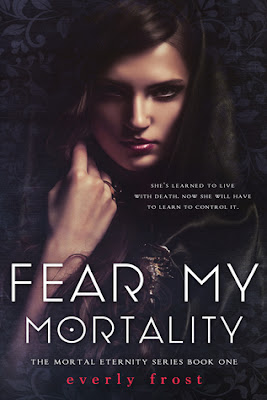 
The future is bright for 16-year-old Ava Holland and the residents of Evereach. They don’t have to worry about old age or even getting sick. In their world, humans regenerate, heal, and live for hundreds of years. Mortality isn’t something to fear. Disease has been all but eradicated.

Everything changes when Ava watches her brother die and he doesn’t regenerate. Ava’s genetics are called into question by the government, scientists, extremists, and Ava herself. Could her genes hold the answer to mortality? Is she an anomaly or something to be feared?

Determined not to become anyone’s guinea pig, Ava doesn’t stick around to find out. She wants answers too, but the only person who can help her is 17-year-old Michael Bradley, the boy who killed her brother. If either of them have even the slightest chance of survival, they must find the genetic keys hidden in Ava’s DNA before it’s too late.

Fear My Mortality is the first installment author Everly Frost's Mortal Eternity series. Thanks to a war between Evereach and Seversand where nobody actually died, children are now tested to ensure that they can't be killed. This has stopped unnecessary wars that seem to pop up like out of control gophers on golf courses. People are placed into two categories: slow healers, and fast healers. But, nobody saw Ava coming.

16-year old protagonist Ava Holland faces her own Implosion Day (first death day) where she is supposed to see her own blood and regenerate after dying. It is a hopeful day that means her transition to adulthood where she can grow her hair longer, drink, and move away from her parents. Unfortunately, fate throws Ava a nasty curveball ball when her brother Josh races to save her, but dies at the hands of 17-year old Michael Bradley. The most shocking part of Josh's death is that he doesn't regenerate like he is supposed to.

Freaked out, and with good reasons, Ava faces a battery of forced tests, a loss of parents, and friends, and an unknown future where everyone in the government, and others want to use her blood as a weapon. Almost everyone finds reasons to use her and push her to her extreme limits. I dare say the worse offenders are the Bashers who are extreme to the core and see's whole new avenues with Ava's blood.

Let's get to the reasons I loved this book so much. I adore Ava. Here is a girl who is looking forward to the future when her brother goes and gets himself killed. A brother who kept a huge secret to himself, but in the end, did what he could to try to save her. That is all that matters to me. Ava knows that she may be used as a weapon against her own countries adversaries and that no matter how far she runs, she will never quite be free. After being injected with a strange nectar, Ava becomes Black Widow on steroids.

She's quicker, she's stronger, and she realizes that the nectar gives her the ability to stay alive. Ava could have raged against societies unfairness and went into a room with quiet music and coloring books since her feelings were hurt so badly. She could have cried and whined her way through the entire story. She didn't do any of that. Instead, she gathered up her courage and puts her smarts to good use. She doesn't let anyone push her around, not even Michael Goddamn Bradley who has his own pain and issues to deal with but becomes Ava's fiercest protector.

Michael Goddamn Bradley who goes through great lengths to help Ava even at the expense of his own pain and suffering which puts him at odds with his own family. Fear My Mortality is a fast-paced, action packed, twisted sort of story that is filled with situations where Ava can't sit around tweeting about how badly she's been treated and why. She makes choices and even though they lead to thrilling chase scene at the end, she doesn't turn back and give up.

It should be obvious now that I have little or no regrets about reading this book. I found only minor issues with the story, certain lags, but overall this story is brilliant and enjoyable. I am definitely all in when it comes to reading the sequel.