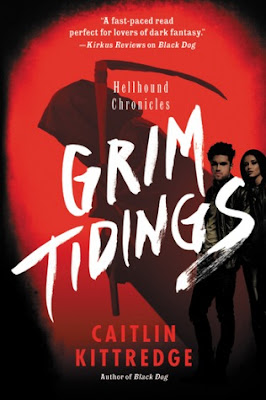 In this thrilling sequel to Black Dog—award-winning Caitlin Kittredge’s dark urban fantasy series, Hellhound Chronicles—a soul catcher must stop demonic monsters from her past from infecting the world

After winning her freedom from a reaper and facing off against a fearsome demon boss, Ava is now a masterless hellhound. Her friend, Leo, has found a new life after death himself: He’s returned as the Grim Reaper—the first in centuries. As both try to adjust to their new circumstances, Ava’s dark past comes back to wreak havoc on her . . . and the entire world.

A breed of monsters as smart as vampires—but who behave like zombies—have been sighted in Kansas. Ava can’t believe these “zompires” are back. She thought she’d kicked their asses for good when she first battled them in a Nazi death camp. Now, they’re spreading their infection across America’s heartland thanks to a nasty piece of business named Cain.

Free at last after being locked up in Hell for millennia, Cain has some scores to settle. To stop him, Ava must form an unholy alliance with some old foes . . . a bargain that will lead her to uncover deeply buried truths about her past—and Leo’s future.

Grim Tidings is the second installment in author Caitlin Kittredge's Hellhound Chronicles. Picking up where Black Dog left off, Ava has an interesting journey ahead of her. She has survived her former master Gary who she agreed to work with after dying in 1919. She spent almost 100 years working for Gary as an indentured servant collecting souls of those who made a deal with the devil.

Now that Gary has been disposed of, and her boyfriend Leo has become the new Grim Reaper after dying by Lilith's hands, the duo finds themselves traveling to Minneapolis where Leo's Scythe is supposed to be kept. But, they have no idea that Ava's past is about ready to jump out and bite her in the ass once again, or that they will be pushed to the limits by other reapers and hounds.

Ava has also agreed to work with Uriel and the Kingdom hunting down and eliminating Fallen. Something that doesn't quite sit right with Leo. But, for now, let's get to the real meat and potatoes of the story and skip over the angst, anger, and curiosities that happen in this story. With flashbacks going back to 1944, Ava faces her darkest challenge of her hellhound life.

Calling himself The Walking Man, and apparently skipping out on Tartarus thanks to Lilith's actions, Cain has managed to darken Ava's doorstep since she escaped a Nazi concentration camp with a brilliant doctor named Jacob Gottlieb. The camp was the place where crazy scientists, most likely with Cain's assistance, created a cross between vampires and zombies. As the author is calling them zompires, I shall do the same.

From Nazi Germany, to Kansas where she meets an officer named Don Tanner who has been on the hunt for a man called The Walking Man. Ava and Tanner's story weaves its way thru the middle of the 20th century as they catch up to and eliminate Cain's zompire's. But, Cain isn't quite done with Ava who he calls his little bird. In the present, Cain has been pushed into calling down the apocalypse by using his zompires to destroy the world. Only Ava, Leo, and Uriel stand in the way.

Characters often make some pretty stupid and silly mistakes. Ava has made more than her fair share for you, me, and about 100 other people. She's a hard-ass most of the times, but she is also under a whole lot of pressure from Uriel and Leo who continues to nag and bitch and act like a puppet master instead of Ava's protector and boyfriend. Sometimes she talks the talk and walks the walk, but other times she's a sniveling dribbling mess.

There are more than a few instances where Ava choose wrong. But, that's what's nice about this being a series. It gives her time to make up for the mistakes, and take out her enemies. I dare say that there are a whole lot of unanswered questions waiting to be revealed in all their glory. Let's hope volume three kicks up the action and adventure full throttle.