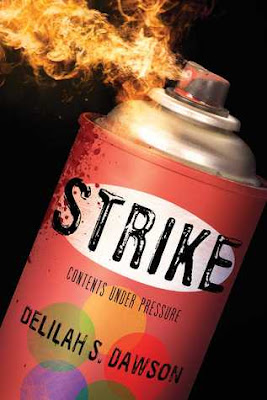 Time to strike back.

After faking her own death to escape her term as an indentured assassin for Valor Savings Bank, Patsy is on the run with her boyfriend, Wyatt. All she wants to do is go home, but that’s never going to happen—not as long as Valor’s out to get her and the people she loves.

Left with no good choices, Patsy’s only option is to meet with a mysterious group that calls itself the Citizens for Freedom.

But Patsy knows the CFF has a few secrets of their own. One thing is certain: they’ll do absolutely anything to complete their mission, no matter who’s standing in their way. Even if it’s Patsy herself.

Strike is the second installment in author Delilah S. Dawson's Hit series. Strike picks up right where Hit left off.  Having fulfilled her obligation by eliminating the TEN people on her kill list in Five days, and not knowing if her mother Karen is alive or dead,  17-year old Patsy Klein, her boyfriend Wyatt, and her  dog Matty, have chosen to go on the lam.

Patsy has faked her own death to avoid continuing as one of Valor Savings Banks indentured assassins. Now, she and Wyatt seek a group of people calling themselves Citizens For Freedom. CFF promises that they are all in when it comes to fighting back against Valor, as well as it's rival Second Union which has sent its own agent provocateurs to kill Patsy and other Valor mercenaries. Valor's machinations have quickly spread across the country, and they are just waiting for the right moment to swoop in and completely take over the entire country and create more chaos.

Right from the beginning of Strike, things are tense to the point where you haven't a clue what is going to happen next. Patsy and Wyatt meet soon to be friends/allies Chance, Gabriela, Kevin, Bea, and Rex. They find themselves going on dangerous missions to strike back against Valor. Missions that to the naked eye make absolutely no sense whatsoever. Patsy isn't the shy sort, so she naturally finds herself going toe to toe with Leon's decisions and missions.

CFF wants Patsy's group to blow shit up and kill anyone who stands in their way. But, Patsy isn't necessarily a full blown non-feeling killer. She has emotions. She has nightmares. She has panic attacks. She's OK with shooting first and asking questions later when anyone tries to get in her way, or hurt her friends, or her dog. She is also OK with using spray paint to send a message to those who are unaware of what Valor is up to hoping that the tide will turn in their favor.

Can Patsy and Wyatt and their allies trust the leader of CFF Leon Crane? Or, is Leon just another bloviating malcontent who speaks out of both sides of his mouth while planning something that will end up costing Patsy and others their lives? Strike ups the ante to the extreme limits over Hit. Patsy, who thought she was done killing innocents, finds herself between a rock (CFF) and a hard place (Valor).

Games are played. Secrets are revealed. Shocking facts are brought to the light of day, and Patsy ends up with a whole new outlook on Valor and her own family ties to the bank. She also has a new enemy just waiting over the horizon to show up in all his glory. I said after reading Hit that this book isn't that far fetched. Especially after what happened during the early 21st century with banks lending money like it was water, and then going belly up without consequences.

Those with bad credit were given home loans, credit cards, and school loans they had no intention of ever paying back. The most frightening aspect of this series so far is the truth that most consumers have no idea what they are signing when they agree to a home loan, or credit card, or school loan. It is a fact that most people do not read the fine print. They are too busy with social networking, or texting, or whining about their feelings while demanding free shit. They have no clue what is really in their phone bills, or credit card statements, or even cable bills. If they did, there might be a consumer revolution that is desperately necessary.

Can you imagine a country that has lent the US trillions of dollars like China, showing up and demanding their money back? Utter and total chaos. Dawson sends a powerful message that all readers should take heed. Perhaps when and if they do read this book and her message, we can finally moved towards more consumer protections. 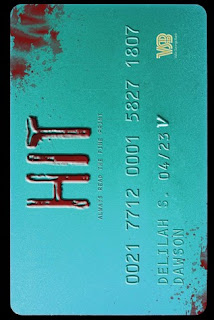