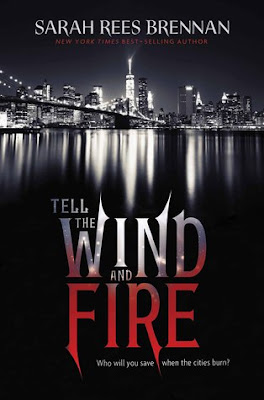 In a city divided between opulent luxury in the Light and fierce privations in the Dark, a determined young woman survives by guarding her secrets. Lucie Manette was born in the Dark half of the city, but careful manipulations won her a home in the Light, celebrity status, and a rich, loving boyfriend. Now she just wants to keep her head down, but her boyfriend has a dark secret of his own—one involving an apparent stranger who is destitute and despised.Lucie alone knows of the deadly connection the young men share, and even as the knowledge leads her to make a grave mistake, she can trust no one with the truth.Blood and secrets alike spill out when revolution erupts. With both halves of the city burning, and mercy nowhere to be found, can Lucie save either boy—or herself?Celebrated author Sarah Rees Brennan tells a magical tale of romance and revolution, love and loss.

"Tell the wind and the fire where to stop, but don't tell me."

Author Sarah Rees Brennan, who I know best from her The Lynnburn Legacy trilogy, takes on Charles Dickens A Tale of Two Cities. While Dickens story takes place in London and Paris before and during the French Revolution, Brennan re-images her own version of the story. Tell The Wind and Fire takes place in an alternative reality New York City. A city that is divided by Light and Dark Magic.

The city of Light holds all the power and privilege, while the Dark, while necessary for the survival of light magicians, are kept at bay and under wraps. Brennan's protagonist is 17-year old Lucie Manette, aka The Golden Thread in the Dark. Lucie was born in the Dark City and is a trained light magician/medic just like her mother, and her father. For the past 2 years, she has lived in the Light. She can wield a sword, just as easily as she can use magic.

Lucie is currently in a relationship with Ethan Stryker, who's own family is at the top of the Light food chain and leads the Light Council. But, things are not as they seem. There are rumors of a rebellion by a group known as Sans-Merci, and Ethan is accused of being a traitor by passing information to the group. Ethan's family also has a deep, dark secret. They created a doppelganger in Ethan's image, and doppelganger, Carwyn, suddenly appears and throws everything Lucie knows into turmoil.

Having a doppelganger is against the law, but who is going to tell the powerful Stryker family what to do? Carwyn is anything but a lovable character. He is mean spirited at times, sarcastic to the core, and whether or not he is actually a trustworthy ally, is a matter of time and space. But, don't throw eggs at him just yet. He isn't all that bad when all is said and done. Will Lucie stand up for the Light in a time of rebellion, or will she become the Golden One for the Dark?

This story doesn't take a straight path to the final outcome. It meanders it's way through things that probably won't make any sense to certain readers. Lucie is a strange character at times. She obviously cares about Ethan, but she ends up on a collision course of feelings for Carwyn, including eating cupcakes, and setting him free against all sorts of laws.

Then there is the obvious correlation to the French Revolution. Let me say that there wasn't anything beautiful about the Revolution. Elites, brilliant minds, every day people, and those who had personal vendetta's against another, were taken to the guillotine and disposed of. In this story, instead of using a guillotine, the Dark uses cages which is probably just as gruesome once you consider the outcome.

We have now become a society where authors rage against the injustice machine whether stated, or unstated. This story once again hits on the usual angles of a society divided by race, by inequality, and by magic. This story lines has been told in books like Red Rising and Red Queen, as examples. I am glad that this book is a standalone. I am glad because after all is said and done, there is no reason to continue hoping Lucie and Ethan make better choices and decisions.