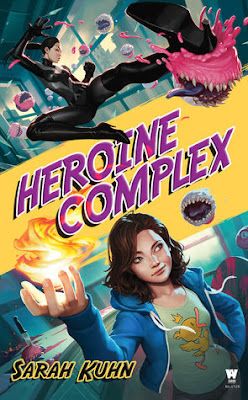 
Being a superheroine is hard. Working for one is even harder.

Evie Tanaka is the put-upon personal assistant to Aveda Jupiter, her childhood best friend and San Francisco's most beloved superheroine. She's great at her job—blending into the background, handling her boss's epic diva tantrums, and getting demon blood out of leather pants.


Unfortunately, she's not nearly as together when it comes to running her own life, standing up for herself, or raising her tempestuous teenage sister, Bea.

But everything changes when Evie's forced to pose as her glamorous boss for one night, and her darkest comes out: she has powers, too. Now it's up to her to contend with murderous cupcakes, nosy gossip bloggers, and supernatural karaoke battles—all while juggling unexpected romance and Aveda's increasingly outrageous demands. And when a larger threat emerges, Evie must finally take charge and become a superheroine in her own right... or see her city fall to a full-on demonic invasion.

Heroine Complex is the first installment by author Sarah Kuhn Heroine Complex trilogy. Meet 26-year old Evie Tanka, assistant to San Francisco's favorite super-heroine and daughter Aveda Jupiter. Evie is Aveda's personal assistant, personal groomer, shopper, babysitter, and confidant to her childhood best friend who is more of a diva than any Kardashian. But, Evie is more than just an do all assistant. She's also responsible for her younger sister Bea who is 16 going on 36.

Evie has a secret all of her own that only a few people know about. Kuhn's alternative reality San Francisco is a place where Eight years ago, a large portal opened from the Otherworld and gave random humans like Aveda Jupiter & Magnificent Mercedes superpowers. Aveda saw it as a sign that she needs to be a hero. But, Evie, also one of those random humans who was given a brilliant ability, has tried to hide her powers away. Evie's plans of hiding behind Aveda, and going through life unnoticed gets waylaid when Aveda is hurt is a demon invasion (demons turning into pastries). Aveda suggest that Evie take her place, temporarily, while her injury heals.

Becoming Aveda should be Easy Peasy, right? After all, who knows Aveda better than Evie? Plus, she has a group of friends like Lucy Valdez to help her train, Nate Jones who is a demon expert, and Scott, her one time ex, who has the ability to heal. Evie has no choice but to use her abilities hen Aveda statues come to life and start causing problems. From then on out, Aveda aka Evie's reputation soars sky high. People love the fact that their idol now has the ability to create balls of fire. Evie would do anything NOT to have this power.

So, let's get to the rest of it. There is plenty of snark to go around. There is an obnoxious blogger who follows Aveda/Evie around like a shark seeing blood in the water. She has a tendency of NOT liking Evie, at all, and comes up with the most annoying name ever to describe her. There is humorous banter between Evie and Nate, and a bit of romance as well. There is a dangerous villain, and plenty of demons to go around. But, there is perhaps a bit too much cattiness between so called friends. But, in the end, I actually liked the way that Kuhn wraps things up. I like this cast. It's pretty diverse with a Chinese and Half-Japanese main characters.

I do not believe that this book was intended for those in the Young Adult range. I understand that there might be some misconception due to the comic book look of the cover, but trust me folks, this is much more of a adult subject manner, than young adult.