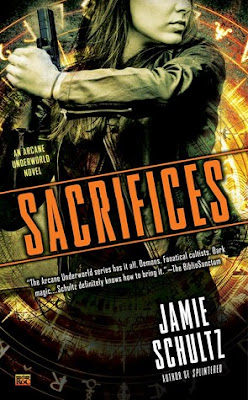 Things get a little demonic in the latest Arcane Underwold novel from the author of Splintered.  Thanks to their recent involvement with a magus crimelord and his demonic partner in mayhem, occult thieves Anna Ruiz and Karyn Ames are both stuck sharing head space with a demon. But while Karyn’s possession has had the unexpected benefit of focusing her visions of the future, Anna’s demon is spurring on her darkest urges, and it’s only a matter of time before she acts on them—and hurts someone in the process.   To save their skins, the two need to find a mysterious relic. But with their search taking them into some of the darkest places in the arcane underworld, Anna and Karyn will have to ally themselves with a group no self-respecting thief would be caught dead with—the Federal Bureau of Investigation...

Sacrifices is the third and apparent final installment in author Jamie Schultz's Arcane Underground series. Anna Ruiz and Karyn Ames have been friends for the 10 years. They have a reputation at being very good at stealing dubious occult items from their rightful owners. Two months ago, things changed when they met notorious crime boss & millionaire Enoch Sobell. Since that meeting, he has given them more and more dangerous jobs in order to help Karyn out with her hallucinations.

Sobell forced Anna to take on Genevieve Lyle, a talented practitioner in the occult arts and a sort of spy among the group who was last seen leaving with Sobell & Belial. The fourth member of the group is former soldier DeShawn "Nails" Owens. After Anna took over the leadership of the group in Splintered, it led to her and Karyn being betrayed and possessed by separate demons. As Sacrifices opens, Karyn's demon is actually helping her, while Anna's is making her more and more angry, feeling destructive, and wanting to kill someone.

This leads Anna, Karyn, and Nails to search for a relic that Karyn's prophecy has foretold that can save them from their demons. Sobell is also after it since it can save him from hell. This leads to an unlikely agreement with the FBI's non-standard Investigations Branch & Special Agent Elliot. This also leads to Anna returning to the neighborhood where she grew up. A neighborhood ripe with strife between several gangs. A neighborhood with a strange priest that seems to possess some unusual beliefs.

I am happy that Karyn is back after barely being there in Splintered. As the leader of the group for so long, I am happy to see her able to deal with her precognitive abilities without getting stuck in an alternate reality. I dare say that Anna continues to be the heart and soul of this group. She is the key member of the group and she is the one who kicks some serious ass in this book. I am also glad that she and Genevieve are back together after what I felt was Genevieve's betrayal in the previous book. Don't feel sorry for Nail as the only dude in the group. He is more than what he's worth in gold and what he brings to the table.

On that note, I am saddened to learn that this is the final installment in this series. I do wish that more people had found this series to their liking. This is a rather dark urban fantasy series, but one that I happen to like because I'm not one to shy away from bloodshed and violence. The occult aspect of this series is also different in that when a
practitioner uses one of the relics, he or she loses a bit of themselves in the process. The more they use, the more they come committed to joining the denizens of hell for eternity. If you want an example of this, think Willow from Buffy fame. The more she used dark magic, the more obsessed with it she became. 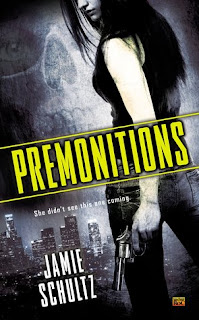 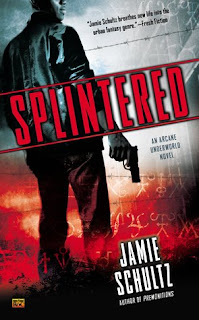