#Saturday Review - The Walls Around Us by Nova Ren Suma (YA, Mystery) 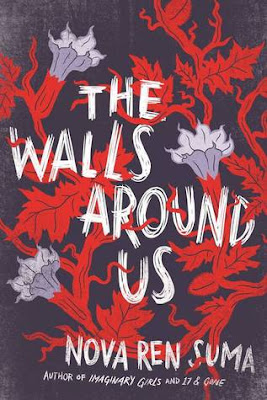 
On the outside, there's Violet, an eighteen-year-old dancer days away from the life of her dreams when something threatens to expose the shocking truth of her achievement.

On the inside, within the walls of the Aurora Hills juvenile detention center, there's Amber, locked up for so long she can't imagine freedom.


Tying their two worlds together is Orianna, who holds the key to unlocking all the girls' darkest mysteries…

In prose that sings from line to line, Nova Ren Suma tells a supernatural tale of guilt and of innocence, and of what happens when one is mistaken for the other.

In a place called Aurora Hills Juvenile Detention Center, resides Amber Smith (prisoner #9188-38). Amber has been incarcerated in Aurora Hills for the past 3 years after being found guilty of manslaughter. Amber is one of 41 worst female juvenile offenders in New York State who have all been found guilty of one crime or another. As one of the longest serving inmates, Amber has the job of library cart. But, what makes Amber interesting, is her strange glimpses into what is coming to Aurora Hills, especially after the night when the power goes out.

On the outside, lives 18-year old Violet, a ballet dancer who is set to attend Julliard. But, for Violet, Orianna Speerling, her once best friend who has been dead now for 3 years, will always be the one who she has had to prove herself against. Suma really does paint an eerie picture of how ballet dancers are a bunch of vicious backstabbing perhaps childish characters who will go to great lengths to lessen the talents and accomplishments of others. Violet, to me, is an unlikable character. She is straight out of the movie Black Swan, and I ended up disliking that movie a whole lot. Can I say that I actually rooted against her?

Suma alternates narratives between Amber and Violet, but the key to this entire story is what actually happened to Ori, and why she ended up at Aurora Hills. I will say that I ended up liking Amber a whole lot better than Violet, and Ori, well, her situation broke my heart. Amber, you see, isn't exactly innocent, but her actions were reason enough for me to want to give her a hug, and hope she will find a way out of her situation. This story is one of the most twisted stories that has been released in awhile. It walks the line between contemporary, and paranormal, then leaves such a holy crap did that just happen ending that will have your gasping like a fish out of water.

Nova Ren Suma's The Walls Around Us once again proves the depths the author has at creating fantastic and interesting characters while also giving readers a few chills to go along with your journey. Ever since the release of Imaginary Girls, Suma has been on my radar for the author to look for whenever a new book of hers is released. The Walls Around Us does not disappoint. It is a dark, insightful, dangerous, curious, and gets so into your head, that you need a few minutes to digest what the heck you just read.

Do yourself a favor, and read this book ASAP!