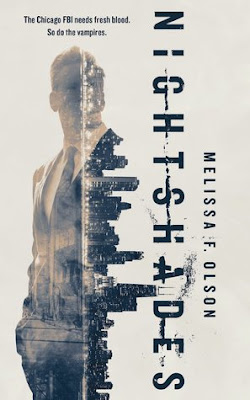 
Alex McKenna is the new Special Agent in Charge of the Chicago office of the Bureau of Paranormal Investigations—the division tasked with investigating crimes involving shades.


Children have been going missing, and agents are routinely being slaughtered. It’s up to McKenna, and some unlikely allies, to get to the bottom of the problem, and find the kids before it’s too late.

Melissa F. Olson (author of the Boundary Magic and Scarlett Bernard series) and Tor.com, have put together a short story called Nightshades that has plenty of intrigue and action that focuses on what would happen if the Mortal world discovered that the paranormal world actually existed and has been there the entire time. In this case, Olson has created shades, or if you like, vampires who are unafraid of pushing their weight around.

After a team from the FBI's Bureau of Preternatural Investigation Chicago branch is slaughtered, leaving only one survivor, FBI Special agent and legacy Alex McKenna chooses to ask for a promotion to Chicago to uncover what is really going on there. It is Alex's job to put together a new team that can uncover why the team was killed off, and if there is anything he and his team can do to stop it from spreading.

Alex team starts with his best friend Special Agent Chase Eddy, and in a surprise move, tracks down a shade named Lindy (Siegland) who has been working alongside humans while keeping a low profile for many years. The surprise is that Lindy agrees to work with Alex's team while keeping her identity a secret. Lindy has a large role in this book. She has insights to what is happening and who is most likely responsible. Something Alex doesn't have access to.

In fact, Olson switches up narratives between Alex, Lindy, and Special Agent Gabriel Ruiz to keep things exciting and also interesting which is a key to a book this short. I won't go any further than this because the ending leaves a gigantic and stunning cliffhanger ending. I am hopeful that if this really is a new series from Olson, that it picks up right where this story left off. Nightshades is definitely worth the time to read it.