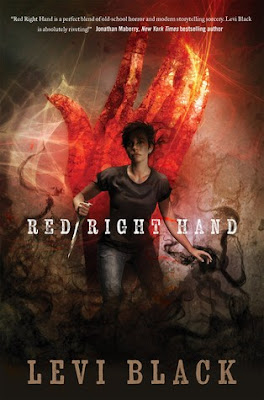 Charlie Tristan Moore isn't a hero. She's a survivor. On a night when her demons from the past are triggered, she arrives home to something even more harrowing-an attack by three monstrous skinhounds, creatures straight out of nightmares. She fights but is outmatched. Just as hope seems lost, in sweeps The Man In Black, a rescuer even more monstrous and unlikely, dressed in a long, dark coat that seems to have a life of its own and with a black-bladed sword held in his terrible, red right hand.

Her rescue comes at a cost. She must become his new Acolyte and embrace a dark magick she never knew she had inside her. To ensure she gives it her all, he takes her friend and possible love, Daniel, in thrall as a hostage to her obedience. The Man in Black, a Lovecraftian chaos god, claims to be battling his brethren gods, other horrors who are staging an incipient apocalypse. But is he truly the lesser of all evils or merely killing off the competition? Either way, will Charlie be strong enough to save herself, Daniel, and possibly the entire world?

Red Right Hand is the first installment in author Levi Black's Red Right Hand series. Black, it seems, is influenced by the workings of author H.P Lovecraft, and that comes into play after Charlie (Charlotte Tristan Moore) comes home to find THREE skinhounds ready to pounce on her. She is rescued by a man who calls himself Nyarlathotep aka Crawling Chaos. He claims that they were sent to kill her because of what's in her blood. Nyarlathotep is the man with the Red Right Hand. He is also a bit on the scary side with his Red Hand, and Long Black Jacket, and knife that can cut a person in half.

The Elder God claims Charlie is H.P. Lovecraft's descendant on her mother's side and that she has the ability to SEE things that may help save her world from other Elder Gods who are eager to bring chaos to the mortal plane. Charlie, to say the least, isn't all that impressed by the Elder God with the Red Right Hand and isn't all that eager to be anyone's acolyte. In fact, she's downright antagonistic towards him until the God lures her ex-Daniel Langford into his web. Not only has Nyarlathotep chosen Charlie to become his acolyte, but he forces Daniel into becoming his puppet to control Charlie and to accept her new fate.

Charlie not only can see things, but with certain talisman, she can use transdimensional teleportation to track down would be targets. Her new ability allows her to step through the void between time and space and take several people along for the ride. But, this is also Charlie learning a whole lot about herself, about the Elder Gods that are supposed to be terrorizing her world, and I dare say coming to terms with the fact that her past doesn't make her who she is now. Her past, no matter how traumatic, doesn't get to guide her when there are powerful monsters, and Gods just waiting to suck the lives out of mortals.

Red Right Hand is a combination of Urban Fantasy and Horror. There are some very dark situations that pop up in this book. They are graphic, and perhaps to young eyes, might be considered unsuitable. Charlie is an interesting character in that her past drove her to better herself so that it never happens to her again. She taught herself martial arts, she's closed herself off to having long lasting relationships, and she has an attitude to match the chip on her shoulder. She's a protagonist who I look forward to seeing how she grows as the series progresses.

Levi is an author that I've known and met under the name of James R. Tuck in 2012. His previous series was called Deacon Chalk: Occult Bounty Hunter. When he writes, he holds absolutely nothing back. There is violence, there is bloodshed, and there are action scenes that are vividly written so that you the reader, can put yourself in the protagonists shoes. His characters all have problems. None of them are Mary Sue's. None of them run away from trouble. All of them seem to carry a heavy load on their shoulders which gives them drive and desire to ensure those that they care about aren't innocent victims.