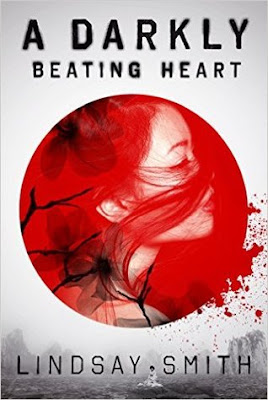 A time-travel story that alternates between modern day and 19th century Japan as one girl confronts the darkness lurking in her soul.

No one knows what to do with Reiko. She is full of hatred. All she can think about is how to best hurt herself and the people closest to her. After a failed suicide attempt, Reiko’s parents send her from their Seattle home to spend the summer with family in Japan to learn to control her emotions. But while visiting Kuramagi, a historic village preserved to reflect the nineteenth-century Edo period, Reiko finds herself slipping back in time into the life of Miyu, a young woman even more bent on revenge than Reiko herself. Reiko loves being Miyu, until she discovers the secret of Kuramagi village, and must face down Miyu’s demons as well as her own.

A Darkly Beating Heart is a young adult, science fiction novel by author Lindsay Smith. Smith is also the author of the Skandal duology which I loved. A Darkly Beating Heart is about a troubled American born girl of Japanese ancestry named Reiko Azumi. Reiko is sent to Japan by her parents to sort out her issues, while also waiting for word on whether or not she gets into the school of her choice.

After being discharged from school, and sent to a psych ward, Reiko sets herself on a path towards destruction and revenge. She feels betrayed by her ex, let down by her parents and brother, and plans on making one helluva exit when she gets her revenge.

"I am mastering the path of hatred. I am in control. I will make them pay."

In the three months she's been in Japan, Reiko has been working for her uncle's company as a photographer. Since she speaks barely any Japanese, the language barrier is often an issue for Reiko. Surprising or not, Reiko has little understanding of her own parents culture and heritage. Her cousin Akiko is all about me, me, me, and more me. When Akiko takes Reiko, Kenji, and Mariko to the Kuramagi village for a cultural fair, Reiko is swept away to the Edo era of Japan.

There she becomes a girl named Miyo who is hated by the entire village, and loathed even by her own father. Reiko believes that she can permanently leave the present behind and all her grievances, and become Miyo who has her own revenge plots just waiting to be revealed. Miyo, not unlike Reiko, has made mistakes that have ostracized them. Both of them, in a way, have embarrassed their families to the point where they both now want revenge on those who they feel stabbed them in the back.

Both girls are about violence, upheaval, and renewal. Both girls find comfort in a Samurai warrior named Jiro, but Reiko may also like a girl who works at the Bed & Breakfast she's staying at. One could say that this story is a multi-diverse story. Reiko is not only Asian-American, but she is also bisexual. Reiko is a character who takes a whole lot to like, but eventually you get the whole story of what made her turn towards revenge. The time travel part of the story is definitely the highlight of this book. There are some minor cultural issues that I had problems with, but nothing so drastic that I would throw a hissy fit over.