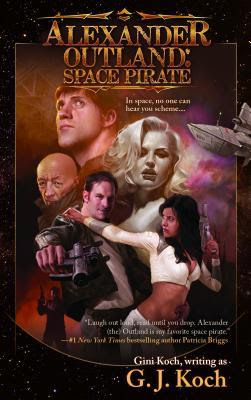 Captain Alexander Outland of the Sixty-Nine (short for Space Vessel 369, of course) is the best pilot in the galaxy. He’s also a pirate, a smuggler, and loved and loathed by women in umpteen solar systems. His crew of strays and misfits includes an engineer of dubious sanity, a deposed planetary governor, an annoyingly unflappable Sexbot copilot, and a slinky weapons chief who stubbornly refuses to give the captain a tumble.Outland just wants to make a decent living skirting the law, but after an invisible space armada starts cutting into his business, he finds himself in hot water with the military, the mob, mad bombers, and an extended family of would-be conquerors. And that’s not counting an occasionally telepathic spy.Like any sensible scoundrel, he hates heroics. They’re risky and they don’t pay well. But to keep his ship and crew in one piece, and make time with a certain hard-to-get weapons chief, he might just have to make an exception—and save the galaxy in spite of himself!

Gini Koch, author of the Katherine "Kitty" Katt series, releases a new series that begins with Alexander Outland: Space Pirate. Captain Alexander Napoleon Outland is this series Malcolm Reynolds (Firefly). He is the captain of a ship called Sixty Nine. Yes, folks, this is actually the name of the ship. The rest of the crew includes Randolph (Chief Engineer), Slinkie (Weapons Officer), dethroned Governor Murgat, and Audrey (Fembot, Co-Pilot) built by Randolph.

Captain Outland is one of the best pilots in the galaxy, a pirate, a scoundrel, a man who loves the ladies, and usually leaves them behind wanting to strangle him. After one such encounter, Outland and his crew find themselves facing an invisible armada that has been creating problems for the Gamma Quadrant. After landing on the Planet of Herion, Outland and his crew face all sorts of challenges.

The first challenge is that he is the only pilot able to land his ship on the Planet in awhile. Which makes him a target for the good, and the bad. As usual, Koch witticism, and snarky banter is clear right from the beginning. Outland has crazy feelings for Slinkie, but she won't give him the time of the day, let alone a rumble in the sheets. This is a quick moving, action packed story that had me laughing through many scenes. I mentioned that Outland is a lot like Malcolm from Firefly, but I think there are also parts of Spaceballs involved
in the story as well.

Throw in a pirate armada with a ridiculous name, and a not soon to be forgettable through the sewer system of Herion, and you are sure to have one of the best experiences reading a book in a very long time. The author states that this is the first installment in the series. I do see where this story was originally released in 2012. I do hope a sequel is forthcoming soon!

Posted by Shelley Romano at 8:32 AM