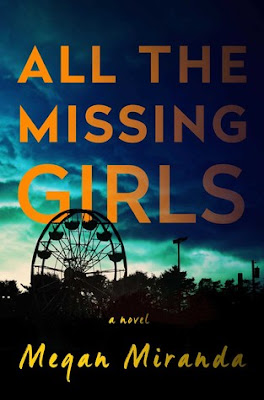 Like the spellbinding psychological suspense in The Girl on the Train and Luckiest Girl Alive, Megan Miranda’s novel is a nail-biting, breathtaking story about the disappearances of two young women—a decade apart—told in reverse.

It’s been ten years since Nicolette Farrell left her rural hometown after her best friend, Corinne, disappeared from Cooley Ridge without a trace. Back again to tie up loose ends and care for her ailing father, Nic is soon plunged into a shocking drama that reawakens Corinne’s case and breaks open old wounds long since stitched.

The decade-old investigation focused on Nic, her brother Daniel, boyfriend Tyler, and Corinne’s boyfriend Jackson. Since then, only Nic has left Cooley Ridge. Daniel and his wife, Laura, are expecting a baby; Jackson works at the town bar; and Tyler is dating Annaleise Carter, Nic’s younger neighbor and the group’s alibi the night Corinne disappeared. Then, within days of Nic’s return, Annaleise goes missing.

Told backwards—Day 15 to Day 1—from the time Annaleise goes missing, Nic works to unravel the truth about her younger neighbor’s disappearance, revealing shocking truths about her friends, her family, and what really happened to Corinne that night ten years ago.

Like nothing you’ve ever read before, All the Missing Girls delivers in all the right ways. With twists and turns that lead down dark alleys and dead ends, you may think you’re walking a familiar path, but then Megan Miranda turns it all upside down and inside out and leaves us wondering just how far we would be willing to go to protect those we love.

“People were like Russian nesting dolls - versions stacked inside the latest edition. But they all still lived inside, unchanged, just out of sight.”

Megan Miranda's All The Missing Girls is a standalone tale told in a rather unique and strange way. The story is a psychological thriller and mystery that surrounds key characters such as Nicolette Farrell, her brother Daniel Farrell, and Tyler, her ex-boyfriend who is now seeing Nic's next door neighbor Annaleise Carter. Annaleise was a key witness (10) years ago when Nicolette's best friend went missing, and was never found. After Corinne Prescott disappeared, Nic chose to leave Cooley Ridge, North Carolina behind.

Flash forward to the present and what is being called Day 1 of this story. Here we find that Nicolette has a boyfriend, a job, and a small apartment. But, after she receives a strange message from her father, a father that has dementia, she decides to return to her families home in North Carolina to help fix up it up, and perhaps sell it to pay the bills. Shortly after returning home, Annaleise Carter disappears without a trace, and the town is once again whipped into a frenzy.

“Missing girls had a way of working their way into someone's head. You couldn't help but see them in everyone - how temporary and fragile we might be. One moment here, and the next, nothing more than a photo staring from a storefront window.”

Miranda tells her story by jumping ahead two weeks to what she's calling day Fifteen. From there, she counts backwards. It is a strange way to tell a story, but it somehow works. Things come together in a way that you wouldn't imagine they could. Besides the unique backwards counting, you still have the present, and the after everything is figure out, and what comes next. At the center of this story is three girls who were best friends, with one of them being the queen bee. But, after Corinne goes missing, there are things that just don't add up until you dissect them piece by piece, character by character.

What really happened Ten years ago? What really happened to Corinne , and now that Annaleise has disappeared, has the same thing happened to her as well? One of the things about telling a story backwards, is that you really don't have the predictability factor that often times comes with mysteries. What you really have is a dark book, that leads to questions about pretty much the entire town. Can you imagine? Living in a town where almost anyone could be guilty? Can you find it in your heart to actually forgive any of these characters after you discover what happened that fateful night in the past that drives events of the present?