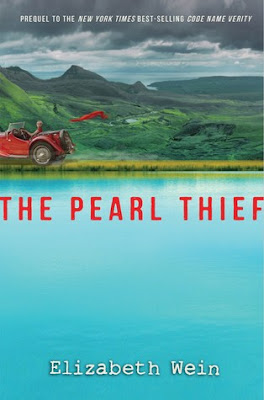 
Before Verity…there was Julie.When fifteen-year-old Julia Beaufort-Stuart wakes up in the hospital, she knows the lazy summer break she’d imagined won’t be exactly like she anticipated. And once she returns to her grandfather’s estate, a bit banged up but alive, she begins to realize that her injury might not have been an accident. One of her family’s employees is missing, and he disappeared on the very same day she landed in the hospital.Desperate to figure out what happened, she befriends Euan McEwen, the Scottish Traveller boy who found her when she was injured, and his standoffish sister, Ellen. As Julie grows closer to this family, she experiences some of the prejudices they’ve grown used to firsthand, a stark contrast to her own upbringing, and finds herself exploring thrilling new experiences that have nothing to do with a missing-person investigation.Her memory of that day returns to her in pieces, and when a body is discovered, her new friends are caught in the crosshairs of long-held biases about Travellers. Julie must get to the bottom of the mystery in order to keep them from being framed for the crime.

The Pearl Thief, by author Elizabeth Wein, is being sold as the prequel to Code Name Verity. The author went back in time a few years before CNV took place and decided to tell the story about 15-year old Julia Lindsay MacKenzie Wallace Beaufort Stuart, one of the heroine's of Code Name Verity. It is the summer of 1938, when Julia returns to her Grandfather's ancestral home in Scotland unannounced. Her Grandfather's home is being turned into a school due to his substantial debt.

Without going too much into the story, Julia finds herself waking up in the hospital with no memory of what really happened to her. It is a place where she finds that she has been saved by two Travelers (Ellen & Euan McEwen) who are treated with disrespect and loathing because of their social status. Julia herself is thought to be a Traveler by a bigoted nursing staff, and that brings us to the have, have-nots storyline that hangs over the story. One could say that this leads to her eventual path serving her country in World War II.

After being released, Julia's journey takes her through a further understanding of the Travelers, a sexual awakening where she has feelings for both the boy and girl Travelers, but honestly, it is Ellen who Julia really has the most fun with. Along with her brother Jamie, Julia, Ellen, & Ewen work together in an attempt to solve a very curious mystery that hangs over the reconstruction of her Grandfather's home into a school. The Pearl Thief is much lighter in nature than Code Name Verity. I didn't find myself reaching for a Kleenex while reading this book. I did laugh at the banter between Julie and Ellen.

If you haven't read Code Name Verity, this is probably a good place to start. Even if you have read CNV, this story will be something entirely different for you. It's not about the war. It's about Julie's heritage, her relationship with the McEwens & Mary Kinnard, and her exploration of her sexual inclinations. It also is a social commentary about those who have, and those who have not. This story doesn't get into the war between Britain and the Axis. It also doesn't explore why Julie joined the war effort, and later became Verity. That was left for Verity to explain.

The most brilliant aspect of this story is the setting. Scotland is such a beautiful and intriguing place. When I was in the Navy, I always said I would love to travel back to Scotland, and make my home there. The people, the scenery, the history is beyond anything that I've seen in my travels around the world. But, somehow I ended up in Florida instead! ::head desk:::