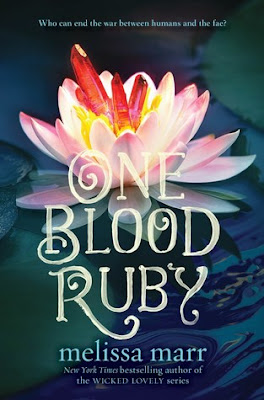 Now that LilyDark Abernathy is the heir to the Hidden Lands, everything is about to change.

The Queen of Blood and Rage wants Lily to help broker peace with the human world, but Lily knows that harmony won’t come easily. After decades of waging war on the humans, who cost the queen her firstborn daughter, the fae are struggling to accept Lily, a half-human monarch. And the humans, while no match against faery affinities, will hardly agree to the queen’s détente without resistance.

Lily wants to be a fair ruler but fears having to abandon the life she’s known to do so. Now that she and Creed are more than just fellow Black Diamonds—operatives for the queen—her priorities have shifted. But her worries about assuming the throne are derailed when it becomes clear that someone—or some fae—is masterminding violent attacks to discourage peace.

In this gripping follow-up to Melissa Marr’s lush Seven Black Diamonds, Lily and her friends are forced to reckon with the truth of their own parentage and to protect one of their own, no matter what—or who—comes between them.

One Blood Ruby is the second installment in author Melissa Marr's Seven Black Diamonds duology. So, here is where we stand. Lily Abernathy, now LilyDark, has become the heir apparent to the Hidden Lands. She has become a voice for peace between the fae, and humans who have been at war over something that happened years before. But, there are still those who want to continue the war, and are doing everything they can to keep humans separated from the fae.

Can Lily, who is more of a cardboard heroine than say Violet is, save the fragile peace, find answers to questions about her heritage, and live happily ever after with her scrub Creed? Outside of Lily, the only character less boring is Creed. Yes, yes, their relationship is cute, and adorable, but what do they really accomplish in the end? What can I say? I love Violet. She takes no lip from anyone, including the King and the Queen of the Hidden Lands. I also loved Eilidh. It is because of Eilidh's actions in the past and in this so called finale that lead to a future that may bring a brighter future.

Speaking of Eilidh. I am curious about what actually happened to her after all her hard work of keeping Lily a secret, and then ensuring that she would become the heir. With her affinities, it makes zero sense that she wasn't chosen to become Queen over Lily who hasn't proven herself. At least Eilidh has the powers to keep people she loves safe, and it's Eilidh who takes the biggest risks and makes the most destruction of her enemies. I find myself liking Zephyr & Rhys relationship better than Lily and Creep, oh, I mean Creed.

It's nice to see a father and son getting along, and not being at each others throats all the time. I do, however, feel that there are so many unanswered questions. What will happen to the fae world after Lily becomes queen? Was Eilidh actuall meant to be queen, rather than Lily? The land chose her, not Lily, so it makes zero sense to keep up the charade. What the hell HAPPENED to Eilidh anyway? Did she and Torquil ever get to be together after that ending? Did Violet give Erik a chance? Did Zephyr ever heal from his loss? What were the consequences of Will coming out to the press?

Unfortunately, readers will be left unimpressed by this finale. I join other reviewers in saying that this story felt rushed to make the deadline. Conflicts, relationships, and resolutions were rushed, a character dies for no rhyme, nor reason, and the lead character once again doesn't stand up to scrutiny. Not even her boyfriend can save this story. The King and Queen of the Hidden Lands relationship was more appealing
to me. As I said above, Violet is my idea of what a heroine should be like. She's strong, she has an attitude that takes no prisoners, she doesn't really need a love life, she already has all the support she needs with her group of 7.