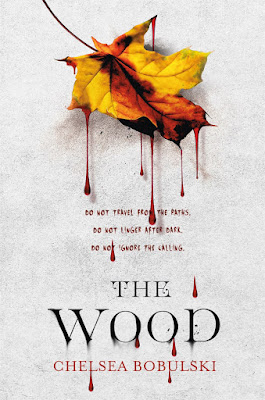 After her father goes missing in the woods that they protect, Winter tries to seek the truth in what happened, why the wood is changing, and what it all has to do with the arrival of a mysterious stranger in this thrilling YA debut.

When Winter’s dad goes missing during his nightly patrol of the wood, it falls to her to patrol the time portals and protect the travelers who slip through them. Winter can't help but think there's more to her dad's disappearance than she's being told.


She soon finds a young man traveling in the wood named Henry who knows more than he should. He believes if they can work together to find his missing parents, they could discover the truth about Winter’s dad.

The wood is poisoned, changing into something sinister—torturing travelers lost it. Winter must put her trust in Henry in order to find the truth and those they’ve lost.

Bobulski’s eerie debut is filled with friendship, family, and the responsibilities we choose and those we do not.

The Wood is author Chelsea Bobulski's debut novel. Winter Parish comes from a long line of those who have been tasked with protecting The Wood. The Wood is a strange place, a magical place, a whimsical place that can only be entered by those who have the blood. A place not even her own mother can enter. It is a place that is filled with gates and thresholds that have a tendency of dropping travelers from all over the time traveling spectrum into Winter's world. The woods is also littered with evolved species that the world has never seen before or won't see for years to come.

The Guardians job is to monitor the wood, and ensure that any and all travelers are sent back to their own time. It is also the job of the Guardian to ensure they never cross over the threshold in to the modern world. By night, the Wood becomes a dark, and dangerous place. A place nobody wants to be caught for fear of never escaping again. Winter was been trained to understand that there are three main rules to being a Guardian. 1. Do no travel from the path. 2. Do not linger after dark. 3. Do not ignore the calling. A Guardian isn't supposed to be able to walk off the path. But....

20 months ago, Winter's father disappeared in a mysterious manner. Winter became the newest Guardian. Thankfully, she had been trained from an early age to be her father's replacement. There are ten guardian families who have bound their families to the Wood. The Parish families connection goes back generations. But, there are nuisances to her father's job that he never spoke about to Winter. His disappearance is just one of the things that makes Winter want to dive into the truth behind what really happened to him with hopes that she can bring him back alive even though he's been declared dead.

But, first she has to discover why a boy from 18th Century England is so eager to return over and over again to the Wood, and why her Uncle Joe wasn't there to save her father.
Henry is clearly connected to the woods and knows things Winter hasn't been told. A boy who may hold the answers to what really happened to Winter's father as well as his own parents who also disappeared. Winter must also figure out what is happening to The Wood, while also traversing the real world expectations of being an above average student who can't tell her so called best friend what she really does.

The Wood has a kind of open ending where the author should be expected to write a sequel. After all, there is a huge question hanging over Winter's future and her role as a Guardian, as well as her relationship with her best friend Meredith, and her mother who has had her own hell to deal with since the loss of her husband. The Wood is a pretty decent story with a plot line that is clear and not hidden under other unnecessary components. There is a decent amount of action, and also a bit of romance. Winter is considered to be intimidating at times, and unapproachable at other times. But she is quick and clever in times of trouble. The plus as to why I would recommend this story is the originality. I love when an author comes up with an original and not copied another authors material.