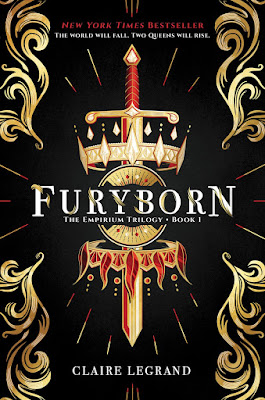 
The stunningly original, must-read fantasy of 2018 follows two fiercely independent young women, centuries apart, who hold the power to save their world...or doom it.
When assassins ambush her best friend, Rielle Dardenne risks everything to save him, exposing herself as one of a pair of prophesied queens: a queen of light, and a queen of blood. To prove she is the Sun Queen, Rielle must endure seven elemental magic trials. If she fails, she will be executed...unless the trials kill her first.
One thousand years later, the legend of Queen Rielle is a fairy tale to Eliana Ferracora. A bounty hunter for the Undying Empire, Eliana believes herself untouchable―until her mother vanishes. To find her, Eliana joins a rebel captain and discovers that the evil at the empire's heart is more terrible than she ever imagined.
As Rielle and Eliana fight in a cosmic war that spans millennia, their stories intersect, and the shocking connections between them ultimately determine the fate of their world―and of each other.

Furyborn, by author Claire Legrand, is the first installment in the author's Empirium trilogy. Set in the fantasy world of Aritas, there is a prophecy: Two Queens will rise. One of blood. One of light.
Generations ago in a war between humans and Angels, the angels were defeated and locked behind a gate. Due to their influence being taken from the world, magic slowly started seeping out of it. This is a story that alternates between two dynamic young women~~Lady Rielle Dardenne and Eliana Ferracora.

During a disastrous horse race, Rielle is forced to use her elemental magic in order to save her best friend, and the boy she has feelings for, the Crown Prince Audric. The problem? For years, Rielle has kept her ability to use elemental magic a secret since revealing it would create too many problems. In response to Rielle's show of power, King Bastian forces her to undergo seven trials to discover if she is the Sun Queen, a long prophesied savior of their people, or the Blood Queen, bringer of destruction.

During the time of her trials, she is persuaded and guided by an character named Corien. That, my friends, is all I am going to say since this character affects both storylines. Rielle also has Audric and her best friend Ludivine as support outlets for when the trial really gets going and Rielle is forced to prove that she's worthy of the title of Sun Queen. One could say that Rielle's story is the reason that Eliana's world exists in its current form. One could also say that Eliana and Rielle's stories mirror each other in the trials and tribulations that they both are forced to face in dealing with a nasty villain and awakening as the supposed destroyer or savior of their world.

Meanwhile, One thousand years in the future, Eliana Ferracora is an assassin/bounty hunter known as The Dread of Orlins. She works to keep her family (including younger brother Remy) alive in a kingdom long conquered by the Undying Empire. She's also considered to be invincible and highly sought after by those who represent the Emperor. When her mother disappears, she has to decide if joining the rebels, under the guidance of a man called Wolf, or ingratiating herself to the Empire will give her a better chance of bringing her family back together.

Eliana will learn that there is still a cosmic battle being waged that she and Rielle have both fought in their own ways. By the time Eliana was coming of age, the stories of magic, angels, and Saints are thought of as myths. Unlike Rielle's time, in Eliana’s world, the Undying Emperor has taken control of the lands and there's almost no free lands remaining to be controlled. It's easy to predict Rielle's background from the action-packed prologue. It's easy to predict who Eliana is as well. Readers will immediately know that something has already happened to both characters, and that the author is just filling in the blanks trying to catch up to the present.

The book gets off to a slow start due to the large amount of world-building and the number of characters introduced. However, once the story truly gets underway, it quickly becomes a page-turner. Readers will find the complex and flawed characters immensely relatable. If you really pay attention, there, at the beginning of each chapter, is an epigraph that tells some important background information that will be revealed. I have to say that Eliana's story is much more action packed for the most part. She has to not only face more adversaries, including monsters, & assassins, while not only protecting her brother and searching for her mother, but learning how to trust other people.

While she's trying to save someone she loves, she also has to deal with ever changing alliance swings, while also understanding her very unique abilities. Meanwhile, Rielle's story is filled with a whole lot of conversation; too much at times, and apparently the need to visually describe a character masterbating. Sorry, but ICK. I don't hate Rielle's story. She really gets tossed in the ringer time and time again. There are pretty revealing similarities between Eliana and Rielle which really shouldn't surprise you after you've read the book. They are both afraid of letting others know of the power they can control. Neither wants to feel as though they will be forced to do something against their will. And, they have others that they love and will do almost anything to save them.

In summary, yes, I will recommend the book giving only a minor warning of perhaps a bit too much information when it comes to sexual situations. Even though this is sold as being Young adult, please know that this is a deeply dark novel. I'm not one to put trigger warnings in my reviews. I enjoy dark fantasy. The darker the better. I could do without certain scenes that the author wrote, but that doesn't mean that I will not read the next installment. Too much of an appetizer has been put out for me to ignore the main course and the desert. Both characters storylines are told in the third person narrative and both end on surprising cliffhangers. If I haven't already mentioned it, I adore Remy. Remy is a curious character in that he knows all about the stories and isn't afraid to enlighten other characters into seeing what he actually knows is fact. I am hoping to warm up to Navi, Simon, Ludivine, and Audric by the time the second installment hits the shelves.
Finally, I feel like Elvis Presley at times of too much conversation and little action. "I need a little less conversation, a little more action please. All this aggravation ain't satisfactioning me. A little more bite and a little less bark. A little less fight and a little more spark. Close your mouth and open up your heart and baby satisfy me. Satisfy me baby."