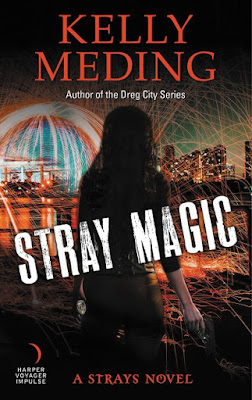 
Shiloh Harrison was hoping for a few days off to recover from a particularly nasty assignment, preferably with the help of the talented hands (and, well, the rest of his body too) of her sexy boyfriend, Vincent. But when a group of vampires takes an entire trailer park hostage, there’s nothing to do but make her apologies and get to the scene.

Such is the life of a Federal Marshal in the Paranormal Investigators Unit.

Yet this isn’t like her typical track-and-nab case: something is going on that has vampires scared, and it takes all her strength not to imagine what could frighten such powerful creatures. Unfortunately, she doesn’t have that option. Her boss is MIA, someone is snatching vampires, and there’s a ticking clock that can only end one way: a bloodbath.
Unless she can stop it.

The first book in a new series, Stray Magic is a dark and sexy mystery, with enough twists and curves to keep you on the edge of your seat until the very end.

Stray Magic, by author Kelly Meding, is the first installment in the authors Strays series. Protagonist Shiloh Harrison is a 28-year-old US Marshall in The Paranormal Investigations Unit under the auspices of the DOJ. Shiloh has been with the unit for 6 years and is currently second-in-command. Shiloh is a half djinni with abilities to grant three wishes and has Quarrel pheromones that are hard for her to control. Her abilities often affect the combative nature of humans. She is tough, snarky, and fun to follow along with.

Her team includes Julius Almeida, the only human on the team, Novak (Incubus), Jaxon (Skin Walker), and Kathleen Allard (Dhampir). The story starts out with a bit of a bang. Shiloh is looking forward to a bit of fun and some much-needed downtime with her current lover, Vincent, when her team is called out to a trailer park where a group of vampires, led by Master Vampire Tennyson, is keeping the humans residents hostage & demanding answers to why his vampires, and some werewolves have suddenly disappeared without a trace.

On top of this, Julius, her team leader, has been missing since the day before, and there's no clue where he's gone, or if hanky panky is involved. As the team scrambles to find Julius, Tennyson manages to insert himself fully into the investigation and Shiloh's life. There are plenty of underlying currents just ready to spring up and surprise Shiloh and readers. Shiloh isn't a leader. But, she must become one quickly and without letting her emotions get the best of her. Who is behind Julius's disappearance and why? Is this same person responsible for the missing vampires and werewolves? Does the unit itself have a traitor in its midst, and if so, what is their end game?

Shiloh's group has some remarkable technology available to them that the author kind of skims over. The group can travel from place to place via specific ley lines, and everyone is hooked up to the latest technology called KIM (Knowledge Interface Matrix). This story has its share of vampires, werewolves, necromancers, and a very curious Goddess whose home is between worlds, and where time moves differently. I liked the fact that the author incorporates her mother, Elspeth, who is the daughter of a Romani, and her Earth Djinni father, Gaius, into the mix. For an adult novel, that is almost unheard of these days.

Shiloh is also not afraid of sex. In fact, she has a boyfriend who she has fun with, has had an encounter with one of her fellow teammates and may be falling for the very dangerous and powerful Tennyson. The author has a tendency of playing games with her characters by putting them in life and death struggles that even one slip up will find them in deep trouble. Really a trough way to end things. Even worse is knowing that there's a whole a year between this book, and the sequel called Stray Moon.

If you haven't read Feral House, in the Carniepunk Anthology, you might want to eventually. This the first chance you will get to meet Shiloh, and her father, and a few other characters who appear in this installment. It's also not a bad anthology with plenty of other big-name authors like Allison Pang, Delilah S. Dawson, Jennifer Estep, Kelly Gay, Kevin Hearne, Rachel Caine, Rob Thurman, and Seanan McGuire.

Meding is also the author of series such as Dreg City, which is also Urban Fantasy with some sexy romance, MetaWars, Cornerstone Run, and The Project Files duology.