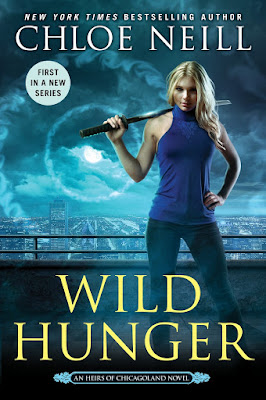 In the first thrilling installment of Chloe Neill’s spinoff to the New York Times bestselling Chicagoland Vampires series, a new vampire will find out just how deep blood ties run.


As the only vampire child ever born, some believed Elisa Sullivan had all the luck. But the magic that helped bring her into the world left her with a dark secret. Shifter Connor Keene, the only son of North American Central Pack Apex Gabriel Keene, is the only one she trusts with it. But she’s a vampire and the daughter of a Master and a Sentinel, and he’s prince of the Pack and its future king.

When the assassination of a diplomat brings old feuds to the fore again, Elisa and Connor must choose between love and family, between honor and obligation, before Chicago disappears forever.

Wild Hunger is the first installment in author Chloe Neill's Heirs of Chicagoland spin-off series. For those who haven't yet read the book, let me summarize as best as I can without any spoilers. First, this story picks up 23 years after the finale of Blade Bound. Alas, there is also a novella called Slaying It that you can also read before picking up this new series, but I don't think it's actually necessary. I've read where reviewers are calling the novella a bridge between the series.

Let's next start out by not calling Elisa Sullivan mini-Merit, or mini-Ethan. Elisa, now 23, and having lived in Paris for the past 4 years, is something the world has never seen before. The first vampire born, not made. Therefore, there are some things that definitely separate her from her parents who were once humans. Readers should also know that Elisa interesting twists to her character which I'm not going to talk about. But, you have it on good authority that the author will explain how she ended up the way she is.

After 4 years in Paris, and attending the Dumas School for Supernaturals, Elisa agreed to a one year mandatory armed service escorting delegates for the Maison Dumas Vampire House. Now, things are going to get a bit wild. First, the story does start out with a bit of suspense. This comes as Elisa is preparing to return to Chicago where a major peace conference is to take place. The conference features all the major vampire houses of Europe, as well as the usual suspects, IE, Merit and Ethan's Cadogan House.

Elisa is thrust into a mystery when one of her friends, shifter Riley Sixkiller, is accused of murder. Something just doesn't add up. Does this incident have anything to do with what happened in Paris? Elisa chooses to investigate along with the new members of the Ombudsmen office, her best friend Lulu Carmichael, and Connor Keene, the heir apparent to the North American Central Park and her childhood nemesis. The investigation will bring back an old nemesis of her parents, as well as a new villain who focuses on Elisa.

Do I have to mention who Lulu's mother & father are? Do I have to mention who Connor's father is? I thought not. I liked Lulu, but I am curious as to where the author is going to take her story. She isn't like her mother, at all and that's probably a good thing. She's also really good with a certain sword thanks to her father. I liked Lulu & Elisa's friendship. It reminds me of the beginning when Merit and Mallory lived together before she became a vampire.

Let's chat briefly about Connor and Elisa. The author actually includes a prologue of Elisa and Conner as kids so that you get an understanding of their history. Even though they are often found bickering at each other, you can clearly tell that Connor has made it his job to keep an eye out for her. Yes, he might have been a nuisance as a child, but he's the only one who knows what she is really capable of. Let's call this a slow burn romance, and not be shocked that it happens at all.

The conflict in this story is a long time coming, especially if you read the final 3 books in Merit's series. The political intrigue and players are not subtle, especially not the Fae. It is clear from the get go who the main threats are. Elisa has some real issues to deal with. Can Connor be the voice that she needs to deal with her so called prophecy? Why is it that the author had to name drop like 30 characters before moving on to the good parts of the story? Why is the real action takes place in the final 1/3 of the story? And, why does the author always wrap thing up too quickly? Things to think about while enjoying the story.