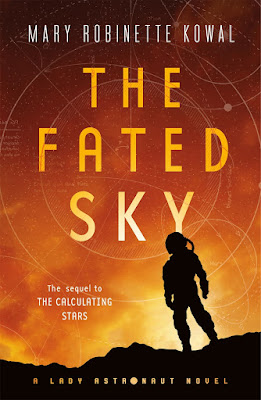 The thrilling continuation of The Calculating Stars

Continuing the grand sweep of alternate history laid out in The Calculating Stars, The Fated Sky looks forward to 1961, when mankind is well-established on the moon and looking forward to its next step: journeying to, and eventually colonizing, Mars. Of course the noted Lady Astronaut Elma York would like to go, but could the International Aerospace Coalition ever stand the thought of putting a woman on such a potentially dangerous mission? Could Elma knowingly take the place of other astronauts who have been overlooked because of their race? And could she really leave behind her husband and the chance to start a family? This gripping look at the real conflicts behind a fantastical space race will put a new spin on our visions of what might have been.

The Fated Sky is the second installment in author Mary Robinette Kowal's Lady Astronaut series. Once again, this story features Dr. Elma York, former WASP pilot, mathematician, and human computer, and most importantly, Lady Astronaut. It has been 3 years since Elma went to the moon but as a spectator. It has been nearly 10 years since the meteorite hit the Earth and changed the course of human history. This time around the year is 1961, Elma is a pilot shuttling people to Earth from Artemis Base, on the Moon but she wants more out of her job. The International Aerospace Coalition (IAC) is already setting its sights on Mars with the Friendship probe as well as Deep space relays.

This book kind of gets off to a strange start. Upon returning to Earth as a passenger, the ship she's traveling in crashes off course in Alabama. This wouldn't have been a big deal were it not for the Earth First people who are not fans of space travel or being left behind so they decide to take hostages which ends up hurting someone's reputation. Kowal uses Earth First as her luddites but forgets her own premise: all of them--or the children’s children--are probably going to die. They’ve a right to be unhappy. Because of this unfortunate happenstance, Elma once again becomes the face of the Mars Expedition program.

Due to politics, Elma is also added to the team. This brings several complications, not least because Elma ends up taking the place of a non-white person who was looking forward to the mission. Elma is incredibly naive sometimes and therefore had to be made aware of what's going around her, but the way she was treated in some situations was simply unacceptable. Elma has been dealing with the prejudice of being a woman in the 1950s male dominated sphere since the very beginning. Yet her interactions with the black community and especially the smart wonderful women were poignant and sometimes she does the wrong thing trying to help.

The Mission to Mars is one that will take 3 years to complete round trip. There will be (3) ships, Santa Maria, Nina, and Pinta. One of the ships will be carrying all the supplies, while the other (2) ships carry (7) men and women astronauts each. (One of the ships takes the name apartheid ship which you should know what that means.) That means that Elma and her husband Nathaniel, will be separated for 3 years. The longest of their marriage. They've even put off having kids to concentrate on saving humanity. One of the best parts of this series has been the marriage between Elma and Nate. It's a realistic portrayal and one that should be applauded.

Once again, Elma's own person nemesis Stetson Parker, is part of the Mission to Mars. Parker's wife and Elma's brother Hershel have something in common which later breaks the ice between the two after years of being at each other’s throats. There is a bit of realism in this book as there are a few casualties and situations where the crew must work together in order to make it to Mars or returning to Earth in failure like real life Apollo 11. As I said before, as someone who watches space exploration regularly, things do go wrong. Space isn't an easy place to be. In this story's case, there are problems with the toilets, with crew members getting sick, and dying, and lifesaving machinery breaking down forcing drastic moves to fix the problems.

I think the thing that bothers me the most about this story overall is that Elma's heritage is completely ignored. Even though in real history millions of Jews were executed by Germany, as well as people from all nationalities, Elma is expected to be mindful of other people's feelings and whether or not she will be called a racist if she steps out of line. Many Americans are so wrapped in their own victimhood, that they are blind to the pain of others. Example:

“Why would I feel guilty” “You’re Jewish. You’re Southern. You feel guilty about being alive.”

**Since the author is telling her story in the 1960's this time around, it does make sense for her to address the racial issues at NASA as well as real women who traveled into space. Maj. Robert H. Lawrence, Jr., on June 30, 1967 became the first African-American astronaut by any national space program. Guion Bluford flew on the eighth space shuttle mission in 1983, was the first Black NASA astronaut to reach orbit. And, we all know that in June 1983, NASA astronaut Sally Ride became the first U.S. woman in space when she launched on the STS-7 mission of the space shuttle Challenger.