Early Review - She Returns From War by Lee Collins 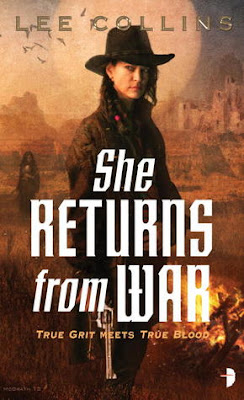 I am remorseful that the Cora Oglesby series is only two books long. I am remorseful that I did NOT read the first book "The Dead of Winter" before reading this one and will do my best to remedy that situation asap! I am saddened that the book wasn't told through the eyes of Cora Oglesby but rather Victoria Dawes. It was through Victoria's eyes that we arrived at our meeting with Cora and it was through Victoria's eyes that the series comes to an abrupt ending, again, after two books.

I loved that Collins wrote his book set not only in England, but Albuquerque, New Mexico where vampires and skin walkers make their home and a place I absolutely love. I liked the fact that Collins seemed to be genuinely respectful of the Navajo Indians that made New Mexico their home and not just ran amok all over them. I liked the western meets paranormal aspect of this book and I really didn't have any overt problems with Victoria as a main character even though at times I wanted to scream at her for being so naive and clumsy. She goes from a sheltered young woman from a well to do family who refuses to be married off and then watches her family get killed off by something similar to a werewolf (which we will never find out since the story ends here!), to a hunter in her own right thanks to Cora's teachings and the things that go bump in the night.

Still, this book takes place 4 years after the first book, and therefore I missed out on what happened to Cora's husband Ben. I need to put all the pieces together before I can fully appreciate the entire series. I need to know what made Cora give up the hunt for vampires, werewolves, and hellhounds and nearly turn her back on Victoria when she's threatened with being raped and brutalized. I need to know what made Cora turn into a drunk bar owner who resembles an old west sheriff who has saw too much and now doesn't care about anyone else's problems. Lastly, I need to know why Collins decided on the ending he did. It's actually a brave move on his part, but then again, it's only TWO BOOKS LONG!!!

In the long run, "She Returns From War" is a well paced and intriguing story that left me satisfied with my overall experience. I would HIGHLY recommend that if you are thinking about reading this series, go out and borrow or buy "The Dead of Winter' first! You won't be sorry that you did.

I'm giving this book 3 1/2 Gizmos not because I was disappointed in the book, but because it didn't satisfy my curiosity about Victoria's return home to England. I need another book!