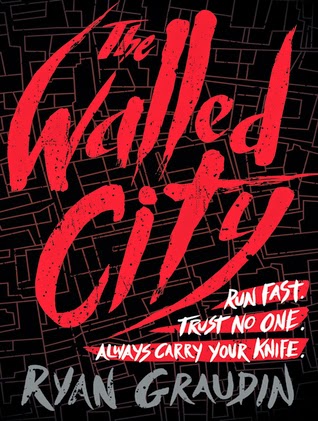 **I received this book for free from Little, Brown Books for Young Reader via NetGalley in exchange for an honest review. Thank you!! This does not affect my opinion of the book or the content of my review.**

730. That's how many days I've been trapped.18. That's how many days I have left to find a way out.DAI, trying to escape a haunting past, traffics drugs for the most ruthless kingpin in the Walled City. But in order to find the key to his freedom, he needs help from someone with the power to be invisible....JIN hides under the radar, afraid the wild street gangs will discover her biggest secret: Jin passes as a boy to stay safe. Still, every chance she gets, she searches for her lost sister....MEI YEE has been trapped in a brothel for the past two years, dreaming of getting out while watching the girls who try fail one by one. She's about to give up, when one day she sees an unexpected face at her window.....In this innovative and adrenaline-fueled novel, they all come together in a desperate attempt to escape a lawless labyrinth before the clock runs out.

The Walled City by Ryan Graudin is a well thought-out, well researched story with realistic characters that jump off the pages and keep you entertained right till the bitter end. The Walled City is a place where criminals, fugitives, prostitutes, gangsters, and homeless kids struggle to survive in a city of 30,000 people all confined to a space no larger that 1 mile in diameter.

The Walled City is NOT a dystopian novel which has caused a bit of a sensation and shock with some reviewers. I, myself, fell into that trap until 747's started flying overhead and then I knew it was something else entirely. It is perhaps more of a thriller, or contemporary story because of its actual setting and realism. One shouldn't avoid reading this story because it's not what you expected.

The Walled City features 3 characters who couldn't be more different even if they tried. The story alternatives between the 3 characters POV which makes you sit up and take notice where the story breaks are and who is telling the story.

14-year old Jin Ling survives the mean streets of the Walled City by disguising herself as a boy. She keeps alive by running, stealing, and carrying a knife to protect her from gangs and vagrants. Her mission: find her sister Mei Yee who was sold off by their own father and bring her home. Her 3 rules for survival are run fast, trust no one, and always carry a knife. A girl found alone in the city ends up being sent directly to the brothel without any hopes of freedom. Jin's only companion is a cat named Chma who is never very far from her side. Jin is by far the most interesting and likable character in this story. She's brave, intelligent, fierce, and unyielding in her determination in finding her older sister. I'm also biased because of the cat angle. Sorry!

17-year old Mei Yee (her sister) was sold by her father to Reapers and ends up in the City's brothel which is controlled by the Brotherhood. After 2 years of living and barely surviving in the brothel and being the exclusive prostitute to an Ambassador, Mei Yee's hopes for escape seems to come from a mysterious boy who is looking for a way to bring down the Brotherhood. Mei isn't the strongest character in this story. She eventually comes around and gains traction as someone to root for, but she's definitely not Jin Ling. Then again, we as readers are told that Jin stood up against their own father while Mei was meek.

Sun Dai Shing is an 18-year old boy who made some bad choices and now is looking for a bit of redemption. As the book picks up, his time in the city is counting down before he is arrested for his past actions. Dai needs help trying to find something that his handler needs to bring down the Brotherhood. He joins forces with Jin, who pretty much does most of the dirty work. Later, a connection is made between Dai and Mei, and Dai is perhaps the older brother than both girls deserved when they were growing up.

The Walled City is a dark book considering it's labeled for Young Adults. I would dare say that perhaps a bit of a warning would go a long way in avoiding shocking the crap out of those who may be a bit sickened or disturbed by the subject matter. The Walled City touches on the subject of sex trafficking which is out of control in our world today. Too many of our young kids are taken away, or sold by their own parents for money. They have no control, or hopes of ever seeing home again. Too many of these kids are never seen from or heard from again. I would suggest that it is time for every country to step up to the plate, and start protecting our children from sexual predators that don't have their best interests at heart.

In the end, yes I would definitely recommend The Walled City to my followers and others. I think readers will love Jin. I do like the fact that Ryan did not throw a love triangle in the middle of everything else that was happening. I think it would have totally devastated my reading enjoyment of the story. Perhaps it is because I like stories with a bit of darkness, but The Walled City is definitely worth reading.