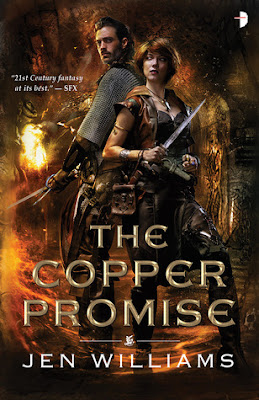 
There are some tall stories about the caverns beneath the Citadel - about magic and mages and monsters and gods. Wydrin of Crosshaven has heard them all, but she's spent long enough trawling caverns and taverns with her companion Sir Sebastian to learn that there's no money to be made in chasing rumors.

But then a crippled nobleman with a dead man's name offers them a job: exploring the Citadel's darkest depths. It sounds like just another quest with gold and adventure ...if they're lucky, they might even have a tale of their own to tell once it's over.

These reckless adventurers will soon learn that sometimes there is truth in rumor. Sometimes a story can save your life.

The Copper Promise is the first installment in author Jen Williams Epic Fantasy trilogy called The Copper Cat. The first installment is actually a collection of FOUR previously published novellas which have been put together to become The Copper Promise. Those novellas are Ghosts of The Citadel, Children of the Fog, Prince of Wounds, and Upon the Ashen Blade. Williams world is called Ede. It is a place where mages and gods once fought for supremacy and the Gods were the apparent losers. But, to be fair, Mages haven't had the luxury of enjoying their brief moment in the spotlight either.

The story focuses on three main characters; Lord Aaron Frith, Wydrin of Crosshaven, and Sebastian Carverson. In the prologue of this story, Aaron finds himself being brutally tortured by invaders who killed his father, and his brothers. This leads to him being rather impulsive, abrupt, angry, and desiring power and revenge against those who couldn't break him. Aaron hires sell-swords Wydrin and Sebastian to lead him deep below the Citadel where there is supposedly massive unclaimed treasures to be had. But, but doesn't tell them the real reason why he needs to be there. What they find instead is betrayal, an awakening of a major god (a Dragon called Y'Ruen), and her daughters who are as blood thirsty as they come. In a way, one could say that Aaron's ego got the best of him and unleashed hell on earth which can only be stopped by three unlikely allies.

Wydrin is a sell-sword (mercenary) known as The Copper Cat of Crosshaven. Copper because she's a redhead who carries two daggers she calls Frostling and Ashes, and isn't afraid to insight violence or cheat to get ahead. Wydrin also has an interesting family. Her mother and brother are both pirates, which goes a very long way in explaining her choice of careers. I absolutely adore Wydrin. I love her snark, her attitude, and her partnership with Sebastian. Sebastian is a disgraced former Ynnsmouth Knight who fell in love with a fellow Knight and was kicked out. Despite everything he has been put through, and his relationship with Wydrin, he still tries to stay true to his God Isu, and his Knight training. He is more serious than Wydrin

The Copper Promise is a story that is as intense as it is dark. Y'Ruen is a nasty piece of work for a dragon. She's not cuddly. She doesn't like anyone riding her, and she isn't worried about annihilating entire villages with fire while eating a few morsels (humans) on her way to destroying the world. Her daughters are actually a delight, if you can imagine that for one second. They are still dangerous, and can kill at the drop of a hat, but they also have a connection to Sebastian which makes them want more. There are more than a few of the daughters who actually come up with names, instead of numbers.

I must say that I am happy that this book found an editor to point out where narratives and characters have changed. I couldn't imagine getting through this book had there not been notes in places telling you what happened in past books, and where the breaks should be. Cuts down on a whole lot of confusion. This is one of those books that is filled with things I truly love. Mages, Pirates, Dragons, Knights, treasure, and griffins that take two of our characters on a roundabout chase throughout several locations!

Next installment: The Iron Ghost - Release date in US - Currently unknown