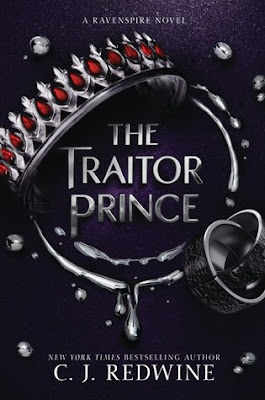 A dark epic fantasy inspired by The Prince and the Pauper and the fairy tale The False Prince about a determined prince who must fight in a gladiator-style competition to unseat the impostor who’s taken his place. The third book in the New York Times bestselling Ravenspire series by C. J. Redwine.

Javan Najafai, the crown prince of Akram, has spent the last ten years at school, far away from his kingdom. He’s been eagerly awaiting his return home to his ailing father, but his journey there goes dangerously wrong. A mysterious impostor has taken his place—and no one will believe Javan is the true prince.


After barely escaping the impostor’s hitmen, Javan is thrown in the most dangerous prison in his kingdom—Maqbara. The only way to gain an audience with the king and reveal the truth is to fight his way out in the prison’s twice-yearly tournament, which pits inmates against a coterie of the deadliest creatures in the world.

The one person who can help him is Sajda, a strong and secretive girl who has been enslaved by Maqbara’s warden since she was a child. Working with Sajda might be the only way Javan can escape alive—but she’s hiding something.

Together, Javan and Sajda will have to outwit the dangerous warden, outfight hundreds of deadly creatures, and outlast the murderous prisoners intent on killing Javan before he can win—in order to fight for their freedom, and take down the impostor once and for all.

The Traitor Prince, by author C.J. Redwine, is the third installment in the Ravenspire series. If you have read the previous two installments, The Shadow Queen and The Wish Granter, you know that the author has used a different set of characters while also recreating certain folktales. Apparently, The Traitor Prince is based on the novel called The False Prince and The Prince and the Pauper. The Traitor Prince doesn't have just one, or two narratives, it actually has three plus plenty of villains for your reading pleasure.

Prince Javan has dedicated his training and achievements to his mother who passed away. Unfortunately for Javan, there are others who would like to see him removed from the picture entirely. After avoiding an assassination attempt, a dragon shifter, and running into a boy who is attempting to pass as him, Javan ends up in Maqbara prison where he will have to fight not only for his freedom, but to keep breathing. Maqbara prison is the place where the Warden pushes the inmates into fighting in a gladiator like environment against all sorts of bizarre monsters. In order to survive, Javan must find a way to secure allies, and avoid being cannon fodder for those who to replace the king with someone else.

Sadja is, I dare say, the most interesting character in this entire book. I liked Javan. I did. I understood his struggles and his determination and was heart broken at one point in the story after he tries so hard to return home. However, Sadja is a curious sort. She is a dark elf who works for the Warden in Maqbara prison. She is responsible for feeding the monsters who are brought to the prison where inmates are bet on by the aristocrats. While Javan is genuinely a nice guy, Sadja isn't afraid of anyone. She's badass and can really stand up for herself without anyone else helping her.

I shall briefly summarize the main villain of the story, Rahim. Born to a mother who lives in a desert, a father who refused to acknowledge him until it suited his pleasure. Rahim isn't a nice guy no matter how much you may want to feel a bit of emotion for. There is a whole lot to think about when it comes to the parental aspects of Rahim's mother and father. Once could gather that Rahim didn't much care for his mother or that he has had to scrap for everything. But, see, there are other characters like Sadja who have no desire to remove a king or kill a prince and take his place.

I have noticed that the author tends to introduce characters for her next book. I, unfortunately, must have missed it because I couldn't tell you who will be featured in the apparent fourth book in this series. This is a book that is action filled whenever Javan is the narrator. Loved the gladiator like environment, plus the appearance of Hansel and Gretel just to make things even more twisted. I've never read the original The Prince and the Pauper, so I can't do a detailed comparison of how similar the plot is to The Traitor Prince.

I can say, however, that Redwine likes to twist her own story without sticking to a clear connection between the two stories. This story reads as a standalone even though Javan and others mention other characters from distant lands like Ravenspire. The romance is pretty muted. Javan and Sadja have a whole lot of other things to worry about than smashing lips and acting like teenagers at the prom. I'm not a huge fan of characters who use religion as a crutch. I won't judge that the author chooses to do so with Javan. To each their own.