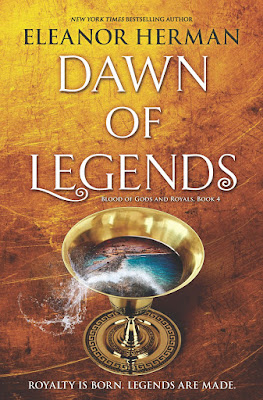 
Prince Alexander of Macedon has battled both men and monsters, but his final war will determine his fate…and the future of mankind. While Macedon’s enemies close in from all corners of the earth, Alexander must fulfil one last prophecy that dictates only he—and he alone—can ensure humanity’s survival against the age of the deadly Spirit Eaters.

As the threads of fate draw Alexander closer to his destiny, an exiled queen will meet a runaway princess, a young sorceress will set the final path of her heart and generals will choose their final battles. Before the light of victory can shine, enemies must become allies, Death must be tamed and hearts must break.

Who will rise and who will die?

Dawn of Legends is the fourth installment in author Eleanor Herman's Blood of Gods and Royals series. Inspired by a teen Alexander the Great, steeped in true history and infused with the magic and Greek mythology, the explosive finale to the Blood of Gods and Royals epic fantasy series is full of royalty, war, magic, forbidden love, danger, betrayal and the triumph of the human spirit. The story begins right where Reign of Serpents left off with a Giant tidal wave and ends with the very Fates themselves, as Prince Alexander of Macedon steps into his role as visionary warrior and unites the Greek States, leading them all to a new dawn of legends.

As an FYI, there are 7 main characters featured in this story with several others added just because they happen to fit in the authors narrative. Four of them are historical figures, 3 of them are figments of the author's imagination. Earth Blood, Snake Blood, Smoke Blood and Spirit Blood all reveal themselves; through Princess Cynane who seeks to build an army of new Amazons; through Kat and Jacob who will spy on the Aesarian Lords and make a plan to defeat the deadly Spirit Eaters; through runaway Persian princess Zofia who gives birth to a new Fate; with cameos from Aristotle and a young Asesop; and through Alex and Heph, reunited friends who together will turn the tide of war into the greatest alliance all of history.

Alexander is a character who I will spent little time with even though this is supposed to be his story. In this world, he has regained control of his mind and body thanks to Jacob and Kat. Now, it is time to stand up and deliver. But, the dreaded spirit eaters are rising quickly and spreading. Alex needs allies, and he needs to find a way to defeat the spirit eaters before they destroy his country. History has all the information you need about Alexander, and what he did in a very short period of time before dying. My disappointment lies in the fact that Alex and his twin sister Kat spent way too little time together, and then it's quickly gone. So, let's carry on....
Cynane, Princess of Macedon (d 323 BC) was the real half-sister to Alexander. She was the daughter of Philip I & was famous for her military knowledge: she conducted armies, and in the field charged at the head of them. In this book, Cynane resents her family, and what they've put her through, including being forced into marrying a King who soon died. Never say that Cynane was not goal oriented. She had a vision and that vision leads her to put together a group of New Amazons who will eventually help Alexander. The final historical figure is Hephaestion, Alexander's best friend, constant companion, and General in Alexander's army. Curious is that they both died during the same year. Heph has had feelings for Katerina since they both found themselves seeking answers as to Kat's magic. There is a hint that Alex and Heph had a similar relationship to that of Achilles and Patroclus. I will let history itself determine whether the author was accurate, or just adding another layer to the legend of Alexander.

Olympias of Epirus was Alexander's mother and one of the most conniving, underhanded, and manipulative characters both in this book, and in real life. I think she was added to this series because many of her choices led to where Alexander eventually gets. I also loved the fact that we have another villain who isn't afraid to get her hands bloody. In the end, Olympias led a very long life and outlived Alexander and the other historical characters in this book. Not a spoiler.
The three fictional characters are Jacob, a boy from a small village who fell in love with a girl named Katerina, and lost her. Jacob is a Earth Blood. He joined the fictional Aesarian Lords who have been a bunch of naughty boys. Jacob's love for Kat brings them together, but will it be enough? Katerina was written to be Alexander's twin sister. Same mother and father. However, Katerina has magical abilities called Snake Blood that allows her to interact with animals. Katerina's story, in the end, was one that I didn't agree with at all. She also irked me by not making a choice between Jacob and Heph who loved her with equal passion. But, since she was written as a young woman who yearns for independence, what happens to her is kind of appropriate. The last character is Princess Zofia who has been through more than any other character in this series. From losing her sister, to being kidnapped into slavery, to finding a mythical Pegasus, to being chased and sought out by a powerful character who wants her baby, and later joining the New Amazons under Queen Cynane. Like Kat, and Cynane, Zofia doesn't actually jump for joy about being married off to someone she doesn't love. She has her own reasons and her own goals.