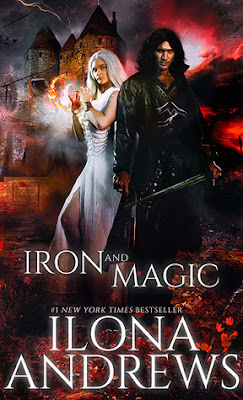 No day is ordinary in a world where Technology and Magic compete for supremacy…But no matter which force is winning, in the apocalypse, a sword will always work. Hugh d’Ambray, Preceptor of the Iron Dogs, Warlord of the Builder of Towers, served only one man. Now his immortal, nearly omnipotent master has cast him aside. Hugh is a shadow of the warrior he was, but when he learns that the Iron Dogs, soldiers who would follow him anywhere, are being hunted down and murdered, he must make a choice: to fade away or to be the leader he was born to be. Hugh knows he must carve a new place for himself and his people, but they have no money, no shelter, and no food, and the necromancers are coming. Fast. Elara Harper is a creature who should not exist. Her enemies call her Abomination; her people call her White Lady. Tasked with their protection, she's trapped between the magical heavyweights about to collide and plunge the state of Kentucky into a war that humans have no power to stop. Desperate to shield her people and their simple way of life, she would accept help from the devil himself—and Hugh d’Ambray might qualify. Hugh needs a base, Elara needs soldiers. Both are infamous for betraying their allies, so how can they create a believable alliance to meet the challenge of their enemies? As the prophet says: “It is better to marry than to burn.” Hugh and Elara may do both.

Iron and Magic is the first installment in authors' Ilona Andrews new series called The Iron Covenant. As this is a spin-off from the Kate Daniels series, and is in the same world as the Daniels series, you will definitely have to have some clue as to what I am referring to as I put together a review that makes sense, and but doesn't spoil anything for future readers. This series features former Roland acolate Hugh d'Ambray, and Elara Harper, a new character, with lots of power and secrets. More about her later.

Hugh is a character who we've all read or heard about before. He is the character who is perhaps Kate and Curran's biggest adversary outside of Roland. He's done some pretty horrific things to people that Kate and Curran call friends. He is the devil who was raised by a God to become the leader of a group called Iron Dogs, an elite private army built for Roland. Hugh jumped whenever Roland told him to go and destroy, and kill someone or something. But, then the unthinkable happened. After failing to do something that Roland asked him to take care of for him, he was cut off.

Even though I've always felt as though Hugh was undeniably the most awful character to come out of this series. Even though he has no redeemable qualities whatsoever. Even though he definitely has a whole lot of pain, suffering, and hurt coming his way. What happens to his people that he put together and made promises to, may be the biggest thing to wake him up from the nightmare he has been living for far too long. As the story opens, we find a very different Hugh. A Hugh who has hit rock bottom.

Hugh's Iron Dogs are being hunted down by another of Roland's accolades. With his men and women being viciously hunted down and killed. With supplies, weapons, and food to feed his people running low, Hugh and his men find a way to make an alliance with someone who is desperately searching for protection from outside forces who are willing to do whatever it takes to push them out from their home and take their land. A character who will push Hugh's buttons. A character who will open another avenue of thinking. And a character that may finally defrost the ice surrounding his heart.

Here's where I talk about Elara Harper. If you thought Hugh was a badass, you ain't seen nothing yet. Elara aka The White Warlock, and her people called The Remaining, have found a home in a castle called Baile. But, there are those who are just waiting to move in and take everything they've worked hard for. Elara will do anything to protect her people, including marrying one of the scariest villains you'll ever meet. But, hold onto your hat people, because Elara isn't a Mary Sue. She's not a pushover.

In fact, she's damn scary, and powerful, and could give Kate Daniels a run for her money in the badassery category of top 10 female heroines. She also has no intention of being submissive and taking orders from anyone. Let alone Hugh d'Ambray. Elara is a remarkable character who I am anxious to find out more about. There is a deeper, darker, more frightening part of Elara that the authors have kept close to their chests. That's probably a good thing since we really didn't understand Kate's full potential until the series really got going.

Elara is the perfect personality for Hugh. She gives as much as she takes, and has some of the most entertaining lines in the story. Elara and Hugh have to face a wide range of villains. There is plenty of action, suspense, and brief romantic scenes. In the end, you start asking yourself questions. Can Hugh finally find the one thing that has been missing from his life, love? Or will his relationship with Elara cause even more blood, and suffering, and death? Can Elara and her people survive knowing that they are allied with some of the most dangerous people in the country, let alone the world? Can the two survive a marriage of convenience, or will the marriage burn to the ground over held secrets?

Iron and Magic also has some curious cameos including Raphael and Andrea. I am particularly eager to understand where the author is going and whether or not other Pack members will be making a cameo in this series as well. With the Kate Daniels series ending this year, I am definitely eager to see what the authors do with this series. Would you call this an redemption series? Mayhaps. I will say that that was one helluva an ending. I am impressed but a bit curious why the authors held back what Elara really is and how come she is so powerful. I can say without spoilers, that she would definitely give Kate Daniels a run for her money in the power department. I would also add that I would LOVE to have Elara on the side of Kate and Curran when the final battle with Roland is fought. Can you imagine how impressive Elara, Hugh, Kate, & Curran as a team would be?