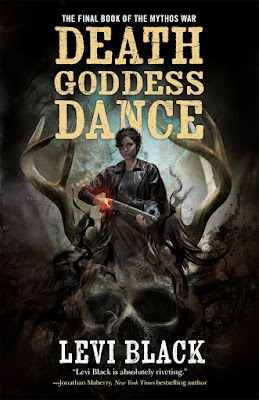 In Red Right Hand, Charlie Tristan Moore became the unwilling acolyte of the Man In Black, a treacherous elder god also known as Nyarlathotep, the Crawling Chaos.
In Black Goat Blues, Charlie fought her way past bloodthirsty gods and demons to rescue her lover’s stolen soul, only to put all of Creation at risk.

Now she must stop the Man In Black from achieving his ultimate goal: freeing his dread father, Azathoth, from endless confinement to feast upon humanity for all eternity. But before she can confront her inhuman mentor for the final time, Charlie must make her way to the heart of a hellish, otherworldly prison—and call upon the darkest powers at her command.

Death Goddess Dance is the third installment in author Levi Black's The Mythos War series. DGD picks up where Black Goat Blues left off. Protagonist Charlotte (Charlie) Tristan Moore is hunting the Man in Black (Nyarlathotep, the God of Chaos and Destruction) who made her his acolyte only to have the student defeat the master. Nyarlathotep wants to release his father Azathoth from his prison where he, himself, put him. It is up to Charlie to stop him or allow the universe to be destroyed.

Charlie wears a black coat made from fallen angel skin that has hidden pockets of unbelievable useful tools, including a shotgun that shoots Balefire & Brimstone, Aqedah, Knife of Abraham, and a desire for payback for what he did to Daniel Langford, the man she has found herself loving. She also has a companion, a skin-hound named Winnie who once took off a huge chunk of her ear. Winnie has become a loyal friend and protector.

Charlies acts like a badass, and tries to walk the walk as a badass, but it is her own powers that are truly impressive. Thanks to the Torc of Ashthoreth, Charlie's most impressive power is her interdimensional teleportation that she uses to track down Nyarlathotep and other Gods. Traveling via interdimensional teleportation, Charlie & Winnie end up in a place where nothing is real, and reality doesn't apply to her. This story sees Charlie tested on all sides. She meets the Sisters of Fates who has to survive in order to proceed further.

She also meets the Death Goddess who calls Charlie a Chaos Hunter, & Emissary of Death. This place Charlie ends up exists only because Death itself exists. It is filled with beings that will gladly test Charlie's last ounce of strength and desire for revenge. Charlie has been crafted into a weapon that strikes from the dark, a weapon shielded only by herself, and an assassin's blade that needs to flashy blade. But, once Charlie and her former teacher meet, will she have enough to defeat him, or will her road to payback end in blood, sweat, and tears?

The book actually has dual endings, which was curious. Even though Amazon claims this is the final book in the series, there is so much more the author can do with Charlie now that she has a new role. We shall see.