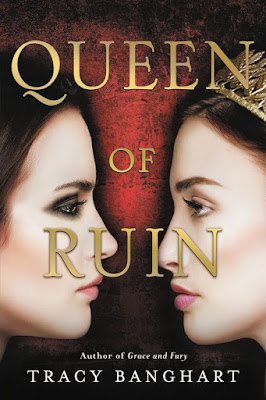 A fierce sequel full of sisterhood, heart pounding action, betrayal, and intrigue in the royal court in a series that "breathes new life into the feminist story of oppression and resistance" (Publisher's Weekly).

When the new, brutal Superior banishes Nomi from Bellaqua, she finds herself powerless and headed towards her all-but-certain death. Her only hope is to find her sister, Serina, on the prison island of Mount Ruin. But when Nomi arrives, it is not the island of conquered, broken women that they expected. It is an island in the grip of revolution, and Serina--polite, submissive Serina--is its leader.

Betrayal, grief, and violence have changed both sisters, and the women of Mount Ruin have their sights set on revenge beyond the confines of their island prison. They plan to sweep across the entire kingdom, issuing in a new age of freedom for all. But first they'll have to get rid of the new Superior, and only Nomi knows how.

Separated once again, this time by choice, Nomi and Serina must forge their own paths as they aim to tear down the world they know, and build something better in its place.

The stakes are higher and the battles bolder in Tracy Banghart's unputdownable sequel to Grace and Fury.

Queen of Ruin is the second and final installment in author Tracy Banghart's Grace and Fury Duology. The world of Viridia has put women down for centuries because they feared what giving women power could lead to based on a history they’ve suppressed. Women were not allowed to be educated, any wages they made were given to their husband, and they were basically property of those husbands. The highest honor for a woman was being a Grace which was just a courtesan to the superior (one of many wives).
The story once again is told via dual narratives from sisters Serina and Nomi Tessaro. Serina and Nomi are both fighting for their lives. Nomi is desperately tying to reunite with her sister after Asa's betrayal and being banished to Mount Ruin. She's also trying to keep Malachi, the Heir, alive so he can reclaim his throne stolen from him by Asa's betrayal. Once the sisters are reunited, they share their experiences and are both surprised at what’s happened.
Serina, through blood, sweat and tears, has become a warrior after leading a revolution of women prisoners on Mount Ruin. She's also become a leader. Serina, for me, is the most interesting sister. She's dealt with the blow of going from not being chosen to be a Grace, which she trained her entire life for, to being sent away to Mount Ruin where she had to deal with overbearing guards, and other women who literally kill to stay alive.

Serina's story is probably what the author was hoping to inspire other young women to be like. Serina also found love in Val, a prison guard with a conscious and a desire to see change. A really good match. The sisters don't stay together for very long. Nomi and Malachi have to find a way to get help before taking on Asa, and Serina has to deal with women on Mount Ruin who have been given a chance at freedom or to fight for their country who turned its back on them.

Nomi was the rebellious sister that realized it wasn’t fair that she did not have the same rights and opportunities as her twin brother, Renzo. She's the book smart sister who learned how to read in a country that has forbidden women from getting an education or having their own money. Nomi did some really dumb things in the first book, namely trusting Asa, but it is her turn to grow as a character and make up for her mistakes as well as saving Malachi who she has fallen for.

Overall, the story wraps up the series on a very nice moment. I loved the fact that the sisters weren't antagonistic towards each other despite Serina not being chosen, and then being sent to Mount Ruin for breaking the law. Serina is the sister that one could only hope to have, while Nomi gets much of the accolades.