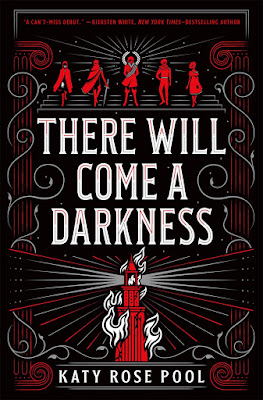 Six of Crows meets Graceling with a dash of Winter is Coming in this showstopping debut YA fantasy!

For over two thousand years, the Seven Prophets guided humanity. Using their visions of the future, they ended wars and united nations—until the day, one hundred years ago, when the Prophets disappeared. All they left behind is one final, secret prophecy, foretelling an Age of Darkness and the birth of a new Prophet who could be the world's salvation . . . or the cause of its destruction.

As chaos takes hold, five lives are set on a collision course: a prince exiled from his kingdom; a ruthless killer known as the Pale Hand; a once-faithful leader torn between his duty and his heart; a reckless gambler with the power to find anything or anyone; and a dying girl on the verge of giving up. One of them—or all of them—could break the world. Will they be savior or destroyer?

Katy Rose Pool's There Will Come a Darkness is the authors debut novel & the first installment in her Age of Darkness trilogy. Pool brings a new spin to the idea of prophecies and chosen ones.  The setup with its setting reminiscent of ancient Greece is also intriguing. For generations, Seven Prophets guided humanity. Using their visions of the future, they ended wars and united nations―until the day, one hundred years ago, when the Prophets disappeared.

All they left behind was one final, secret prophecy, foretelling an Age of Darkness and the birth of a new Prophet who could be the world’s salvation . . . or the cause of its destruction. As chaos takes hold, five souls are set on a collision course:

Hassan a prince exiled from his kingdom.
Ephyra a ruthless killer known as the Pale Hand.
Jude a once-faithful leader torn between his duty and his heart.
Anton a reckless gambler with the power to find anything or anyone.
And Beru a dying girl on the verge of giving up.

One of them―or all of them―could break the world. Will they be savior or destroyer?

In the beginning I did struggle a bit because there were (5) different points of view, each with their own story line. Pool has created a world where some, not all, are Graced with special abilities that fall into (4) categories: Grace of Heart, Blood, Mind, and Sight). The villains of the story are a radical group called the Witnesses. They are led by a man calling himself Hierophant. Hierophant is intent on ridding the world of anyone with Grace which would lead to what is being called the Age of Darkness.

Ephyra is dedicated to her sister Beru. She is a Grace of Blood but instead of being someone who is a healer, she has become the killer known as Pale Hand. Those with the Grace of Blood are able to give and take energy to heal or to harm. Killing monsters, or those who deserve to die, is turning her into one. Ephyra is morally gray who has done some truly crappy things to keep her sister alive. Ephyra is approached by a mysterious woman who claims there is a way to save Beru. She must, however, put her trust in someone which isn't always easy. Ephyra has been compared to a plethora of other series characters but, in the end, she is probably the one character I most feel for because of what she's had to do to keep her sister alive.

Beru is the one character who is without any Grace that we know of. (There's still two more books so we shall see if that changes.) She's been relying on her sister to take care of her for years now. The sisters really do have a tragic backstory that I won't spoil. They are constantly on the run, and Beru feels as though Ephyra would be better off without having to stay with her to ensure she lives. Beru's best moments come later in the book when she undertakes her own journey of self and acceptance that she has her own path to take without her sister around.

Jude is a Paladin who was raised from an early age to play a role in the coming age of darkness. As the heir to the title of Keeper of the Word, he is sworn to protect the last prophet with his life. But, when the Prophets disappeared, the Paladin fled the world to their own island. Did they leave the last prophet to his/her own demise? Jude is also a Grace of Heart which enhances strength, agility speed and senses. Grace of Heart are elite fighters. With a rumor spreading that the Hierophant may have been one of the Order of Light acolyte's, he's already taken one of the 6 prophetic cities, Jude and his Keepers may be forced into fighting a battle against the spreading darkness.

Anton is a very curious Grace. He has the Grace of Sight which senses and locates living beings. He has much, much more to him than that. But, he can't use his grace without seeing his own brother trying to drown him who is tries to stay one step ahead of at all times. Anton is ruthless about his survival and has no time for prophecies, but that's what happens to him. Anton's past relating to his brother leads him to direct confrontation with a woman willing to train him how to use his sight, the Hierophant who wants him, and Jude who learns Anton's greatest secret.

Crown Prince of Herat Hassan lost his home and his parents to the Hierophant and Witnesses. Hassan managed to land in Pallas Athos, one of the Holy Cities, with his aunt where he years to return home and save his parents. Hassan is not one of the Graced. But, his eye open to the plights of his people when he crosses paths with a certain Herati refugee who gets Hassan's blood boiling. Not being Graced like his parents is something he struggles with mightily. Hassan's relationship with Khepri is heart-warming. He's a prince, she's a solder, but they are dynamic together.

Overall, I have to say it is a good thing that I take copious notes when I am reading. I can easily break down each of the 5 main characters plus some really important secondary characters and not feel as though I lost something in translation. This is a huge undertaking by the author to feature 5 distinct characters with the weight of the world on their shoulders. Each of them have a destiny whether they want it or not. Each of these characters could easily become main characters in a flick of a pen.