#Review - The Athena Protocol by Shamim Sarif #YA #Thrillers #Suspense 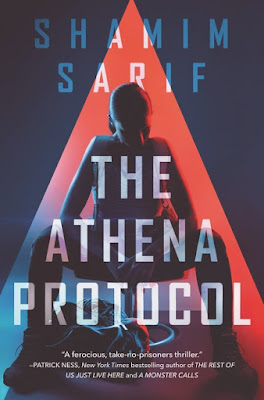 
Jessie Archer is a member of the Athena Protocol, an elite organization of female spies who enact vigilante justice around the world. Athena operatives are never supposed to shoot to kill—so when Jessie can’t stop herself from pulling the trigger, she gets kicked out of the organization right before a huge mission to take down a human trafficker in Belgrade.

Jessie needs to right her wrong and prove herself, so she starts her own investigation into the trafficking. But going rogue means she has no one to watch her back as she delves into the horrors she uncovers. Meanwhile, her former teammates have been ordered to bring her down. Jessie must face danger from all sides if she’s to complete her mission—and survive.

Nonstop action and life-or-death stakes will keep readers turning the pages of this series opener perfect for fans of Ally Carter.

The Athena Protocol is the first installment in the author's yet to be named duology with The Shadow Mission following next year. The Athena Protocol is a secret spy agency of diverse female women who bring justice to the world's evil all over the globe. It was founded by three women (Peggy Delaney, Kit Love, & Li Chen) that uses young, brilliant, diverse, ultra-skilled female operatives (Jessie, Hala, & Caitlin) to save the women and girls of the world from kidnappers and traffickers who the world has ignored.

Jessie is a highly trained agent who will do whatever it takes to bring wrongdoers to justice. Jessie graduated high school at 15 and joined a program that taught her combat training, research, weapons, coding, and hacking. After Jessie shoots someone dead, which is against company directives, she finds herself on the outside looking in. But, that doesn't stop Jessie. She was one of the researchers for their next mission and she's not going to be left out. The impact of her being kicked off the Athena Protocol team and having to violate every rule that she's been taught, isn't going to stop Jessie from doing what she needs to do.

Jessie chooses to go rogue in order to take down a human trafficking ring. He takes women to a designer baby factor where he harvests their eggs for wealthy clients. Jessie believes she will be an asset in helping bring down the man, and not just sit on the sidelines twiddling her thumbs while her teammates risk their lives. She's undoubtedly talented and highly trained, but she's supposed to be a team player. Her actions are a bit on the cocky side, and she sometimes overvalues her training and ends up needing a bit of help to get out of bad situations.

As Jessie investigates the head of the human trafficking ring, she gets to know his daughter, Paulina. The two are undeniably drawn to each other—even though Jessie suspects that Paulina knows more about her father’s wrongdoings than she lets on. To add a bit of depth to the story, Jessie’s mother, Kit Love, is a retired pop star and one of the Athena founders. Their relationship is fraught with resentment from Kit having spent most of Jessie’s childhood on tour, and things only get worse between them when she kicks Jessie out of Athena.

Despite their difficult pasts, they obviously care deeply about each other. They just haven’t quite figured out how to express those feelings yet. Jessie's relationship with her teammates isn't one to be ignored. Both Caitlin and Hala bring their own skill sets to the table, and both are not happy when Jessie steps over the line. After all, they are supposed to watch each others backs. Jessie's relationship with Peggy takes an interesting turn in this story. Peggy may have been the one character who knew who talented Jessie really is, including her tendency to step over the line at times.

Some thoughts: Not sure why this has been labeled as LGBT. The main character has a fling, as one would call it, but it's nothing more than part of her mission. I've seen where the romance is slow burn. Welp, you'll have to read the book yourself and make that determination.

Second, there are several key errors in this book that make this rating what it is. European countries have some kind of registration number for tax purposes, but it's not called a Social Security number. Anyone want to challenge me on this?

Third: Not all countries in Europe have SWAT teams. Some like the UK do, but this story isn't set in the UK. Again, if anyone wants to prove me wrong, please do. Often times, I think that if authors were to do a bit more digging into factual evidence before adding it to a story, the story would be a whole lot more interesting.

Fourth: This book is often compared to The Black Coats by Colleen Oakes. The reason? Both are groups of women who go after men who have wronged a woman. In the era of the #MeToo movement, books like these force readers to question the very fabric of legal tenets. If everyone starts taking justice into their own hands, why do we have a justice system at all? And what is to stop everyone from doing it?

Forgive me for saying so, but in the US, you are still Innocent until proven guilty regardless of overzealous politicians or career district attorney's believe. In the case of Human Traffickers and slavers however, I am willing to cross the line to send these people to Hell if that's what it takes to protect our youngest.