#Review - Bid My Soul Farewell by Beth Revis #YA #Fantasy 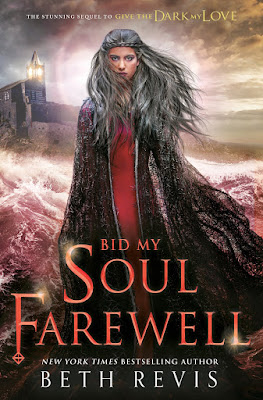 
The stunning finale of the epic fantasy duology from New York Times bestselling author Beth Revis. Alchemy student turned necromancer Nedra Brysstain has made a life-changing decision to embrace the darkness—but can the boy who loves her bring her back to the light before she pays the ultimate price?

Lunar Island is trying to heal. The necromantic plague that ravaged the land has been eradicated, and Emperor Auguste, the young and charming leader of the Allyrian Empire, has a plan: rid the island of necromancy once and for all. Though Greggori “Grey” Astor wants what’s best for his people, he knows that allying himself with Auguste threatens the one person he loves most: necromancer Nedra Brysstain. Feeling like he already failed to save Nedra once, Grey becomes determined to help the Emperor rebuild Lunar Island while still keeping Nedra safe from harm.

Back at the quarantine hospital, Nedra’s army of revenants are growing increasingly inhuman by the day. Wracked with guilt for imprisoning their souls, Nedra vows to discover a way to free the dead while still keeping her sister by her side.

But still reeling from the trauma of the plague, the people of Lunar Island are looking for someone to blame, and Grey can only protect Nedra for so long. And when Nedra and Grey are thrust into a battle with an even more terrifying adversary, Nedra will be pushed to the darkest depths of her necromantic powers. But can Grey let her go that far?

Bid My Soul Farewell, by author Beth Revis, is the final installment in the authors Give the Dark My Love duology. The story picks up right where book one left off. The story actually alternates between Nedra Brysstain, and Grey Astor. In the previous installment, Nedra saved the emperor from captivity and found the necromancer who started the plague and doled out justice. But in the process, Nedra solidified herself as a necromancer, a practice punishable by hanging. People are absolutely terrified of her believing the past has come back to haunt them.

Nedra's undead army, which includes her sister, is dying. Nedra's hope for finding a way to save her sister fades with each passing day. Nedra thought after she defeated the evil necromancer, she would discover a way of saving her sister. Her sister was the first soul she raised from the dead, but it may be too late to save her from dying all over again. Nedra's acceptance of being a necromancer has come with a high cost of her own arm. She also struggles with the loss of her entire family thanks to the plague.

Meanwhile, despite the darkness and lawlessness that has encapsulated Nedra, Grey can’t shake his love for her and his need to protect her. Grey finds himself a pawn of the Emperor when all he really wants to do is help the north regain stability and spend his time with Nedra. The Emperor promises Grey that he will not punish Nedra as long as he plays his part in getting people to believe he's here to help the Island get back on their feet.

Grey's part in this story adds another depth to the story that one would not have had with just Nedra as the main storyteller. Grey constantly defends Nedra, even when he wasn't sure of her motives. He never failed to believe she was a good person and that she will find a way back from the darkness. The most twisted part of this story involves the Emperor and I can't discuss this without spoiling the story for you. Let's just say that you should enjoy the ride, along with the action, and the twists, as well as the ending which is probably as best as you are going to get out of this series.