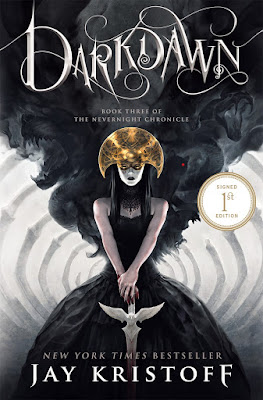 Mia Corvere, gladiatii, escaped slave and infamous assassin, is on the run after committing the most audacious murders in the history of the Itreyan Republic. Her mentor Mercurio is now in the clutches of her enemies. Her own family wishes her dead. And her nemesis, Consul Julius Scaeva, stands but a breath from total dominance over the Republic.

But beneath the city, a dark secret awaits. Together with her lover Ashlinn, estranged brother Jonnen and a mysterious benefactor returned from beyond the veil of death, she must undertake a perilous journey across the Republic, seeking the final answer to the riddle of her life as Truedark approaches. Can Mia survive in a world where even daylight must die?

Darkdawn, by author Jay Kristoff, is the third and final installment in the authors The Nevernight Chronicle. 18-year old Mia Corvere is a darklin possessing the ability to control shadows. She has (2) shadow creatures called Mister Kindly and Eclipse who are able to eat her fear, and calm her down when they are not at each others throats. She is also an assassin who killed a Grand Cardinal, and escaped death with her estranged younger brother Jonnen after winning a contest for the ages. And just to prove that she's capable of doing almost anything, she also freed fellow gladiatii escape from the Remus Collegium.

But, not everything went perfect. Her mentor and father figure Mercurio was captured and taken to the infamous Quiet Mountain where he is lure for a really big fish, Mia. Mercurio's part of the story is really interesting in that we learn some things about Mia that she doesn't even know herself. Mia has spent 8 years planning the deaths for the men responsible for killing her own kin, only to learn some valuable secrets and shocking surprises along the way.

When Mia isn't facing off against her diabolical nemesis who refuses to die, Mia is running for her life, and planning the ultimate badassery in taking the Quiet Mountain from those who have vowed to kill her while saving Mercurio. She also gets the shock of her life when a character from the first book comes back into her life. Wowza, that was bloody brilliant! If you haven’t read Nevernight or Godsgrave, I've done my best not to spoil things for you. However, there are things that have happened that you should discover for yourselves. Kristoff is the mad, evil genius who gets better every book he creates.

This is a bloody series. Lots of people die. Lots of people are killed by Mia, Ashlinn, and the mystery character I'll not spoil. But, it's not gratuitous violence for the sake of bloodshed and violence. Was the ending perfect? Nearly so, but I would have liked a bit more. The author tends to use footnotes at certain places in the book which make you snort, and laugh since parts of them are so silly.