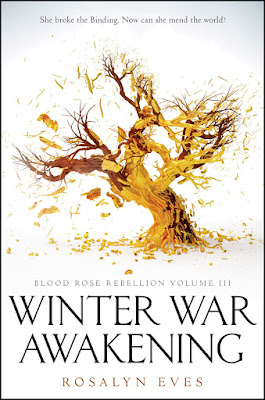 The Binding is broken. Mátyás is alive. And Anna Arden is on the run.

It seems, yet again, that breaking the Binding has shattered the world. And the only hope of mending it is Anna and Mátyás, working together. But it’s never that simple, is it? The praetheria, the creatures once held captive by the spell, are now waging war against the Austro-Hungarian empire. And they are holding Noémi hostage—using her life to manipulate Anna and Mátyás, like marionettes on a string.

Gábor has elected to stay behind, to fight in the Hungarian army’s resistance, while Anna and Mátyás search for their beloved Noémi—a mission doomed from the start, cloaked in praetherian magic. Magic that relies on illusion and misdirection. Eventually, there’s only one way to save her: to split up. And to walk right into the lion’s den.

When everyone thinks they’re fighting each other for the same thing—freedom—can anyone truly win?

Winter War Awakening is the third and final installment in author Rosalyn Eves Blood Rose Rebellion. Austria, 1848, 2 months ago, Anna Arden's cousin Noémi disappeared in Vienna. Today, Anna, who has (2) souls, is a fugitive after breaking the binding spell containing the praetheria. The praetheria, creatures who were once held by a binding spell that Anna broke, are now waging a war against Austro-Hungarian. To make things even worse, Anna left Gábor behind in Buda-Pest to join the Hungarian rebels as she and Mátyás attempt to find and save Noémi.

Unlike the first two books of the series, this finale takes us out of the city and into the bleak but riveting caves that line the Eastern European countryside and mountain ranges during on the of the harshest winters Austria and Hungary have ever known. Both Anna and Mátyás are used to tell this story. Both have mighty struggles. While Anna is being betrayed, sold to the enemies, and used by her own blood in order to help the praetheria, Mátyás is trying to come to terms with his rise from the dead, and his new shifting abilities that really put a target on his back. Anna, who has the twin souls of both a human and a praetheria, struggles to choose a side, especially when her own blood is punishing her to choose or die.

The best part of this story were the connections that Anna has made along the way. Some not so friendly, some come to understand what she is fighting for, and some who are a surprising mix of badass. Hunger struggles with shifting loyalties and complicated feelings towards Anna's cousin Noemi. Emlijia is the daughter of a Croatian General who finds that she has her own path even if that means being Anna's ally. The liderc is one of Anna's allies and a praetheria who actually rises up against the leader of her supposed people. Gabor, well, he made a hard choice to fight a war while Anna is trying to save it. He and Anna want to be together, but their cultures and social statuses clash at every turn.

If you are a fan of Historical Fiction, you will catch on quickly to this world, especially if you've read European history. Part of this story is the real historical Hungarian Revolution for Independence of 1848 and the real life Franz Joseph as well as other key figures. It is fair to say that war is the powerful motivation driving every character in this book and thus it is dark, bloody, and characters do die. I am actually OK with characters dying as long as it is part of the overall situation and not just because it's easy to write someone out of the story. One is supposed to have feelings for the praetheria, but one shouldn't just ignore the bloodshed and violence committed in the name of creating your own country.


These mountains gave nothing back. You might offer your secrets to them, and they would be kept safe in the folded rock and jagged crevices.

You might tally your fears against them, and they would be swallowed by the immensity of stone.

You might throw yourself at them and never return.

We were too few, the five of us against these mountains, against the praetheria who might be holding my cousin Noémi in a cave buried somewhere in that imposing stretch of rock—a handful of dust against the weight of the mountains.

Night fell swiftly as we set up camp, a sweep of ink blotting out the Austrian Alps rising all around us. The walls of a military fortress, clamped on high rocks behind me, disappeared as though someone had dropped a curtain over them. But I could feel the mountains even so: craggy stone sentinels piercing the sky overhead, monoliths that would crush me as soon as shelter me. Though the September evening was mild, I shivered in the too-large secondhand dolman I wore over a boy’s shirt and trousers. I wished that Gábor were here, to share his warmth—or that Mátyás would let us start a fire. But my cousin was being uncharacteristically cautious.

I squinted into the night. The mountains facing us were no longer visible, except as a wash of black at the base of a star-strewn sky. Somewhere in that darkness, Noémi waited.

Assuming, of course, that the information we had pieced together in Vienna was correct.

Two months earlier, Noémi had disappeared from Vienna while I was crusading unsuccessfully on behalf of the praetheria, the creatures I’d released from the Binding spell. Before I could do anything to recover her trail, my own life had imploded, and I’d been hunted from Vienna, running until I’d stumbled across Mátyás and Gábor on the puszta.

Together, along with some outlaws Mátyás had befriended, we searched for Noémi in Buda-Pest and at Eszterháza before returning under cover to Vienna to comb the city for clues. The few crumbs of information we found there had led us to an unlikely road into these mountains, pressed like teeth against the sky.

Had we made a web of nothing—built a trail out of strands that, when pinched together, would vanish?

A flare tugged my attention back to our small camp. Zhivka held a tiny flame in her hand, and it danced, a sensuous weave of light and heat. Mátyás batted irritably at her. “Put that out. Someone might see it.”

She swung her hand out of reach. “Oh, don’t be such a wet wood. And who should see us here?”

Any number of people, I thought. Austrian soldiers, come to haul me back to Vienna to suffer a death sentence for the magic that had killed Mátyás and broken the Binding. Or those same soldiers, to collect the bounty on Mátyás’s head, as he and Bahadir had spent the summer as bandits on the Hungarian plains, because apparently dying once had not put sufficient fear of death into him. Or to arrest the praetherian women, Zhivka and the lidérc, for flouting the imperial Hapsburg ruling that all praetheria be sequestered. We had been cautious while gathering information in Vienna, but the lidérc stood guard some hundred or so feet from camp even now, in case our caution had not been enough.

“You said yourself that praetheria sheltered in the caves,” Bahadir said, his dark eyes fixed on the flame in her hand. His voice was soft, but a tightness about his eyes revealed some of his tension. “If they find us here, they will kill us before we can betray their location.”

“And if they should see me, they will see only a samodiva on her way to join her sisters.” The flame maiden in Zhivka’s hands somersaulted, her body forming a neat ring. “You think everything is a trap. I cannot tell if this is caution”—her voice turned sly—“or fear.”

Bahadir shot to his feet. “I believe it’s my turn to keep watch.”

Mátyás looked at Zhivka after the Turkish boy had vanished into the shadows. “That was not kind. Had your father and, later, your best friend been killed before you, you might see traps everywhere too. He is not a coward.”

“I did not say he was. If he thinks I did, it is his own conscience that pricks him, not me.” Zhivka drew the fire around her, a flaming shawl against the brightness of her hair. I wished I could borrow it from her without burning and press its heat against my throbbing shoulder. Then she sighed and let the fire flicker out. “If you are so worried, I will explore the caves tomorrow and report if I find your sister.”

“Thank you,” Mátyás said, his voice a trifle stiff.

“I’ll go with you,” the lidérc said, stepping toward us on her bare goose feet. She’d discarded the boots she wore in more civilized regions. With boots on, she appeared very nearly human, until she met your gaze with her opaque black eyes or grinned to reveal her sharpened teeth. Without boots—well, she had rather the look of a housecat, a predator that only pretends to be domesticated.

Zhivka lifted an eyebrow. “I did not think climbing a mountain was something you enjoyed.”

The lidérc returned a long, steely stare. “It’s not. Neither is spying on my kin. But I offered to help Mátyás find his sister, and I mean to keep my word.”

Zhivka dropped her eyes and did not answer, and I wondered what message had passed unspoken between them.

Shadows curled in around us. I inched toward Mátyás, drawing a blanket over me. Despite the trees surrounding our camp, we were too exposed here.

Mátyás turned to smile at me, and his teeth gleamed faintly in the starlight. “Tired?”

My body was heavy with exhaustion, but I was not tired. There would be no rest here on the hard-packed earth, no rest while finding Noémi was a possibility, halfway up a mountain I could no longer see. “No.”

“You should try to sleep,” Mátyás said. “We’ve a long climb tomorrow.”

I lay back on the ground, my head pillowed against my arms. Tracing the bright lines of stars with my eyes, I tried to scry them, searching out a future that led us to Noémi and not to capture or death.

But if the stars had an answer, I could not read it.