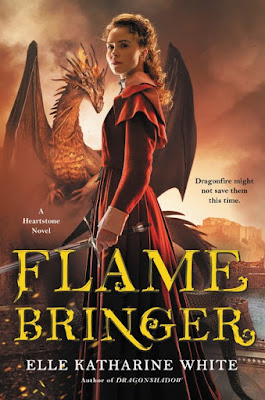 Monsters, manners, and magic combine in this exciting final volume in the Heartstone Trilogy—an exhilarating blend of epic fantasy and Jane Austen’s Pride and Prejudice—in which a fearless healer and her dragon-riding husband must stop a reawakened evil from destroying their world.

It starts with the inconceivable: Wydrick, sworn enemy of the Daireds, is back from the dead, possessed by a ghast that grants him immortality and inhuman strength. From the isolated northern mountains, Aliza, Alastair, and Akarra chase him into the dangerous Old Wilds, realizing too late that he’s led them into a blizzard. Before he vanishes, Wydrick utters a warning: A terrible, ancient evil has awoken, hungry for blood, and is headed their way.

The danger is closer than they know. The Tekari—sworn enemies of humans—are openly roaming the kingdom and are headed towards the capital, Edonarle. Then unexpected news arrives: riding like a dark dragon on the winds from the south, an ambassador from the Silent King of Els, has left the shores of the distant desert kingdom for the first time in centuries.

Unknown enemy? Or unexpected ally? Plunged into a dangerous world of royal intrigue and ancient grudges, Aliza and Alastair soon realize it will take more than steel and dragonfire to save their kingdom. For the silence of Els hides a secret that could shake House Daired to its foundations, and the time has come to settle accounts.
Silence, it seems, is about to be broken.

Flamebringer is the third and final installment in author Elle Katharine White's Heartstone trilogy. This series started out as a homage to Pride and Prejudice but has become more of an epic fantasy novel. The story picks up almost immediately after the events in Dragonshadow. Having been warned by former Ranger Tristan Wydrick that a terrible, ancient evil has awoken, hungry for blood, and is headed their way, Aliza & Alistair Daired, along with Akarra the Dragon, attempt to fly thru a deadly blizzard only to end up stranded in the Rushless Wood.

The visit is marred by trees that have heartbeats, and a warning by a returning character from the previous novel, Johanna, who claims that the Daired's are cursed by darkness that is apparently following them everywhere they go foretold by a defeated Worm in the first book. Having had some deadly experiences in the previous installment, the Daireds and Akarra quickly make their way to Dragonsmoor Mountain where they attempt to convince the Dragons there to join in the fight against the growing darkness and the war to come.

Aliza learns a history older even than the dragons themselves, as well as more about Alastair's family that sends Alastair himself spiraling. This really gives Aliza a chance to stand and deliver and prove that she's no longer a nakla (non-warrior) when it comes to being a Dragon Rider. Weary and battleworn from constantly having to fight for their lives, the Daireds head home for the first time in a month, only to find that the danger has followed them home. After protecting Aliza's sisters (Moira & Leyda) and her parents, they quickly travel to the capital of Edondale only to discover that things are even more disconcerting than previously thought.

Ghastradi have taken over key members of the High Court, places that store dragonhearts have been targeted, Ambassadors from the Garhad Islands and the Southern Principalities are eager to be joined by the Elsian delegation and hope for a trade agreement, and the secretive Shadow Minister, the Silent King of Els, arrives in pomp and circumstance and things soon move quickly towards even more danger for the Dragons, the Daireds, and the Riders. An enemy has waited 600 years to organize rebellious oldkind, discontented humans, traitors and those who have been betrayed.

The ancient enemy seeks vengeance, and it is the Daired's entire family that is targeted for extinction including Catriona, Edmund, Alastair, and Julienne. With the danger escalating putting everyone who Aliza loves in danger, she must join with a unique group of characters, including her own sister Anjey, to fight back before the city falls. The author isn't afraid to kill off key characters giving a bit more gravitas to the situation that Aliza and her allies find themselves in. For me, I think the ending fourth of this story was the best in the book. The action quickly escalated, Aliza had to move quickly on her feet to collect allies, and she never wavered in her determination to save those she loves.

For the past 2 books, the romance between Aliza and Alastair was the main focus. This book focuses more towards the political aspects of the world that is quickly moving towards a war that nobody has answers as to stop it. This is a world of Arle is filled with beings like the Tekari who are hostile to humans (Nixies, Ghouls, Direwolves, Banshees, and Valkyries), Idar who are indifferent to humans (Trolls, Pixies, and Hobgoblins), while Dragons and Wyverns are called Shani since they are friendly to humans. 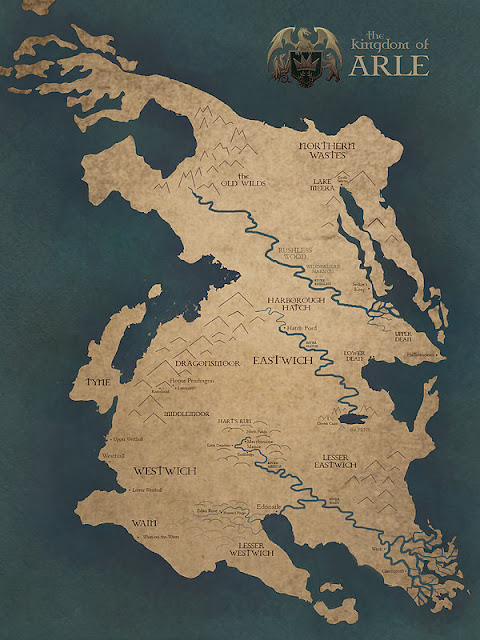