#Review - Fate of Dragons by Alisha Klapheke #YA #Fantasy 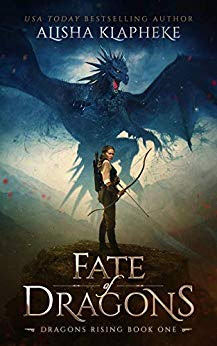 Dragons. Elves. And the last surviving human fated to save them from the sea.

A flood is coming. The Sea Queen has a mad plan to drown the world.

Only the magic of the Earth Queen can stop her.

Vahly, the last human, was born to fill that role and wield the magic necessary to fight the rising oceans and save the dragons.

But Vahly is the world’s biggest disappointment. So far, she possesses no magic whatsoever.

When she finds an ancient scroll that mentions a human power ritual conducted deep in the homeland of the elves, she gathers her dragon allies and journeys to see the king of that forest-dwelling race.

Welcomed into a place more lovely than any dream, will Vahly find the truth about her people’s past and wake her magic or will a twisted and powerful elven lord destroy her chance at saving the world?

Alisha Klapheke's Fate of the Dragons is the first installment in the authors Dragon's Rising series. 23 years ago, the last human child was born and saved by Dragon Matriarch Amona. Vahly is the apparent last surviving human and destined to be the prophesied Earth Queen. She bears a Blackwater mark between her eyebrows—a shimmering oval that represents the origin of creation and magic in this world. But, she has no powers. She's living in a world that doesn't much care for the fact that she's human and powerless.

Especially the Jade Dragons. Thankfully, Amona and Vahly are bound as if they were mother and daughter which gives her a bit of protection. This isn't a world one would wish to live in. Dragons are at constant war with the Sea Queen. The sea queen has all but taken over most of the land leaving very few spots for dragons to call home. Plus, the dragons are mostly divided in how to confront Astraela, the Sea Queen. If their home falls, the Dragons can't survive in the water.

Vahly has been told by her friend Nix about a ritual that she could possibly use in order to awaken her powers. Vahly also spends most of her times with a group of dragons called Call Breakers who have only real alliance to themselves. Vahly soon learns of a place called Illumahrah where Elves supposedly live. Elves and Humans were once allies. Vahly has never seen an Elf since they keep to themselves. As the keeper of blackwater, the Elves should have been aware of Vahly's birth.

Vahly comes across an Elf named Arcturus who seems to have had his meories erased. With the help of Arcturus and a roguish band of dragon allies, including her friend Nix, Vahly sets out on a last ditch attempt to ignite her dormant Earth powers before the waters take the world. Arcturus, as we learn, is alchemist Elf, with royal elven blood who is fascinated by magical science. This is a world of magic that is divided into 4 specialities:

Fire is a naturally the magic of the dragons, beings that have two forms; a humanoid scaled form and their big dragon form. Humn’s possess earth magic, elves posses air magic and the sea creatures have control over water magic.

Meanwhile, under the sea, Ryton is the Sea Queen's consort as well as the commander of the sea army. Astraela has made a deal with Mattin, King of the Elves, yes, Elves do exist in this world as well. They live in a place called Illumahrah where the blackwater, or access to magic, is located. Ryton wants to crush the Dragons once and for all. He has all the pieces in order to prevent the Dragons from finding a new home. Ryton and other commanders want to rid the earth of Dragons forever. If they can control enough of their sea magic, they can overwhelm the dragon. The shock comes when Ryton learns that the Earth Queen has somehow managed to survive against impossible odds.

Yes, the story does end on a cliffhanger. If a reader likes this story, there is no reason not to proceed to the next 3 installments to see what happens next. So, my gracious followers, I will endeavor to do just that!