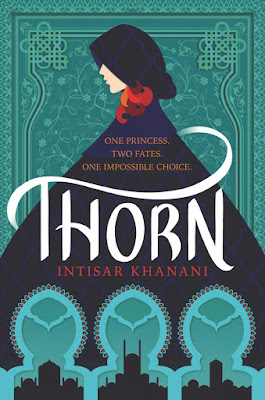 
Hunted meets The Wrath & The Dawn in this fantasy retelling of the Goose Girl fairy tale.

For Princess Alyrra, choice is a luxury she's never had ... until she's betrayed.

Princess Alyrra has never enjoyed the security or power of her rank. Between her family's cruelty and the court's contempt, she has spent her life in the shadows. Forced to marry a powerful foreign prince, Alyrra embarks on a journey to meet her betrothed with little hope for a better future.

But powerful men have powerful enemies--and now, so does Alyrra. Betrayed during a magical attack, her identity is switched with another woman's, giving Alyrra the first choice she's ever had: to start a new life for herself or fight for a prince she's never met. But Alyrra soon finds that Prince Kestrin is not at all what she expected. While walking away will cost Kestrin his life, returning to the court may cost Alyrra her own. As Alyrra is coming to realize, sometime the hardest choice means learning to trust herself.

Thorn is the authors retelling of The Goose Girl. Princess Alyrra of Adanie has lived her life in fear, especially from her abusive brother. Despite the cruelty of her family and the court games she's been forced to play by her other, she's still managed to hold onto her humanity without breaking. Alyrra who is without pretensions, vulnerable, and undervalued by her family, has always longed to escape the confines of her royal life. When her mother betroths her to a powerful prince in a distant Kingdom of Menaiya, she has little hope for a better future.

King of Menaiya seeks a bride who no one would miss if she dies. Alyrra accepts the match knowing that Menaiya has many enemies who will be her enemies and she won't be safe until she arrives in her new home. In a twist of unbelievable fate, a mysterious sorceress and her own personal nemesis, Valka, robs her of both her identity and her role as princess. Instead of fighting back, Alyrra seizes on the opportunity to start a new life for herself as a goose girl. She can now choose her own life and her own path. But, there's a catch.

Thanks to a wicked spell, Thorn cannot tell anyone who she really is or what happened to her and ends up forced out of the palace and into the life of a poor subject looking after geese. Alyrra changes her name to Thorn. She uncovers dangerous secrets about her new world, including a threat to the prince himself. She knows that she must find a way warn the prince and his family before they are destroyed. With the fate of the kingdom at stake, Alyrra is caught between two worlds, and ultimately must decide who she is and what she stands for.

As in the fairy tale it’s based on, Alyrra must find a way to lead her own life as she now has the benefit of actually being who she wants to be without her brother or mother looking over her shoulders. Although she finds herself being a goose girl, Thorn finds a real family who takes her in and welcomes her with open arms. She finds people who could be the family she always wanted; she finds satisfaction in simple hard labor. But, she also can't forget about Prince Kestrin who the Lady seems to want very badly.

The companion book to Thorn, called A Theft of Sunlight, will release in Winter 2021.