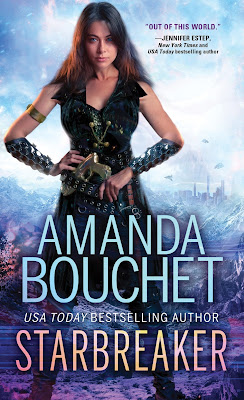 THEY NEVER WANTED TO BE HEROES

Captain Tess Bailey and Shade Ganavan are still the galaxy's Most Wanted, and with revolution in the wind and the universe on the brink of catastrophic war, the situation couldn't be more desperate. Despite the Dark Watch scouring the known sectors for them, rebel leaders have handed the crew of the Endeavor a delicate and dangerous mission: break into Starbase 12 and free renowned scientist Reena Ahern. She's the only one who stands a chance of tipping the odds in their favor for the first time in decades.

BUT PULLING OFF THE IMPOSSIBLE IS WHAT THEY DO BEST

The clock is ticking. But as their attraction builds and secrets are revealed, Tess and Shade must decide if they trust each other enough to execute this impossible prison break. They could change the course of history, but they'll be risking everything... They'll just have to tackle one crisis at a time

Starbreaker is the second installment in author Amanda Bouchet's Nightchaser series. This story alternates between two main characters: Quintessa (Tess) Bailey and former bounty hunter Shade Ganavan. Tess is the Captain of the Endeavor. Her crew includes Jaxon Boudreau, Fiona Winterly, Merrick Maddox, and of course, Bonk the cat. The crew of the Endeavor are Nightchasers who bring food, medicine and other much needed supplies to the people who need it the most while trying to avoid the Galactic Overseer who wants Tess's A1 blood for his super soldier army.


Tess is still fuming over the loss of (2) of her crew members who were like family to her Miko & Shiori. But, she has no time to wallow in anger or sadness. Tess has to meet with her uncle Nathaniel Bridgebane, Commander of the Dark Watch, to deliver some of her A1 blood. (There is part of this story that surrounds Nathaniel, but let's just say that If I were to spoil the reason he is important, it would give away a really emotional moment in this story. We'll see if the author decides to make it official or just write it off.)

But, first she's got a side mission to take care of. This mission was given to them by the head of the rebel council, Lorelei Harris. Daniel Ahern wants Tess & Crew to rescue his wife Reena from Starbase-12 who may hold the key to fixing what the Overseer destroyed. And what do you know, just when they think they've about made it out, things go sideways. Tess later learns that Shiori is at Starbase-12 thanks to her uncle's second in command Lt Sanaa Mwande who is a real badass.

Before Tess and Crew can try to break into the prison, they find themselves heavily involved in another dangerous mission which leads to a shocking surprise and the discovery of a massive program the Overseer is about to unleash on all 18 sectors in order to find those like Tess. Shade, now the hunted, is trying to settle into his new place by Tess's side and on the Endeavor all the while making up for his time as a bounty hunter. After betraying her for the large bounty on Tess's head which could have paid off all of his debts, Shade has since changed his ways.

He's trying hard to make up for what he did as a bounty hunter. Sometimes that conflict causes sparks to fly unnecessary in my opinion. But, Shade is an important part of this crew now. Their relationship is more or less in a solid place until a character from Tess's past shows up. Will Gabe be a thorn in Tess's side, or will he be a good boy? I am going to say it now that I DO NOT Trust Gabe. Read the book and you will understand why. I loved Sanaa and Merrick together. The are both super soldiers and they push each others buttons every chance they get. Will they end up together together? One can only hope.
Hate to wait a full year to see what happens next, but I think we all have better things to worry about than when the next book comes out.