#Review - Of Silver and Shadow by Jennifer Gruenke #YA #Fantasy 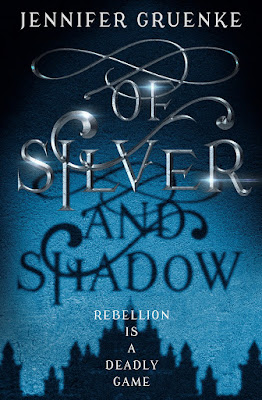 Ren Kolins, a magic wielder in hiding, strikes a deal with a broody rebel plotting to overthrow the tyrant king, while king’s guard member Adley Farre is hunting down the rebels one by one. But time is running out for all of them.

Ren Kolins is a silver wielder—a dangerous thing to be in the kingdom of Erdis, where magic has been outlawed for a century. Ren is just trying to survive, sticking to a life of petty thievery, card games, and pit fighting to get by. But when a wealthy rebel leader discovers her secret, he offers her a fortune to join his revolution. The caveat: she won’t see a single coin until they overthrow the King. Behind the castle walls, a brutal group of warriors known as the King’s Children is engaged in a competition: the first to find the rebel leader will be made King’s Fang, the right hand of the King of Erdis. And Adley Farre is hunting down the rebels one by one, torturing her way to Ren and the rebel leader, and the coveted King’s Fang title. But time is running out for all of them, including the youngest Prince of Erdis, who finds himself pulled into the rebellion. Political tensions have reached a boiling point, and Ren and the rebels must take the throne before war breaks out.

"We’ve all done things we’re not proud of. We’ve all made mistakes. Your demons might be louder than mine, but we each have one or two hanging around."

Of Silver and Shadow is a young adult fantasy novel that is apparently a standalone, but leaves lots of room for a sequel with an ending that leaves questions and no answers. The book has also been pushed back to February 26th 2021 by Flux which I discovered after I had already read the book. In the first quarter of the story, the worldbuilding is nicely described and the underground fighting provide some required action. There are, in essence, four main characters: Ren, Darek, Adley, and Kellen.

18-year old Ren Kolins may be the only non royal silver wielder in the Kingdom of Erdis in 100 years. 100 years ago, King Tallis Lyandor outlawed magic for anyone who isn't a royal and rounded them all up and either killed them or allowed them to escape. 9 years ago, Ren's parents died in a fire the King ordered Ren to be killed on sight after she was found having illegal magic. Present Ren is trying to survive by sticking to a life of petty thievery, card games, and pit fighting to get by. Her one true friend is Freya who is also a healer and runs an orphanage.

Ren wears a corset and is heavily armed at all times. The girl loves her knives. Things change when a rumor spreads about a girl with burn marks across her shoulders. When Ren meets brothers Markus and Darek Hollister who is one of the rebel leaders. Darek offers her a fortune to join his revolution. The caveat: she won’t see a single coin until they overthrow the King. Thanks to a promise she made some years ago, Ren is also dealing with a major gangster who wants to be paid back all the money he's owed even if that means that Ren will work for him for the rest of her life.

Ren is the definition of a reluctant hero with a matching snarky personality and the ability to take care of herself. Her friendship with Freya is above reproach especially since Freya is also a healer. Ren is very much afraid of exposing herself and her power for the rebellion. Which is why she's hesitant to trust people like Holland who is the daughter of Denfell's most popular baker. Ren often puts herself first with stealing unnecessary things just because she can. But, isn't heartless. When she cares for someone, she protects them at all costs. As Ren becomes more involved in the rebellion, she knows that she needs to tear down King Mattheus so that others have a chance to survive.

Adley Farre is what's called a King's Child. She was taken from a slave ship as a child and broken down piece by piece until she became an unstoppable killing machine. One King's Child is more effective than a squadron of trained soldiers. Her accuracy with a bow and arrow is above reproach, but her one weakness is that she's in love with her best friend, Lesa Ghan, who is also a King's Child. Should they end up caught, they would face imminent death. Adley and Lesa are slowly gathering evidence into who the rebels are and what they plan. Her overall goal is to become King's Fang which could offer her freedom. But, is love stronger than duty?

Darek believes that Ren is the one person who can turn the tide on King Mattheus Lyander and his sons Heath and Kellen. And even though she drives him literally to drink, there is something about her that also makes his blood yearn for her touch. Darek took the reigns of the rebellion from his mother who wants Lyandor's rule to end. He would do anything to make her proud including ensuring his younger brother is safe. There is a lot of squabbling (or sexual tension) between Darek and Ren. Happens when you have characters set in their own ways and refusing to budge an inch.

Kellen is the youngest prince with a heart to good who sneaks out nightly to be himself, or at least try to find a place to belong, something relatable to any reader. His relationship with Holland should have been more prominent since the two are definitely made for each other. Kellen is a likable character unlike his brother Heath who has his own hidden agenda that may upset Darek and the rebellions plans.

Positive: World building is also complex, satisfying, thought provoking, reflecting the class differences, the glamorous life the rich people have with their fancy houses and poor people suffer as they live at their old, dilapidated places.  There are some dark moments as well thanks to Adley trying to uncover the identities of the rebellions by using torture.

Cons: An open ended ending that will definitely leave readers frustrated. If not, you have the patience of Job.  The ending. There are many, many, many unanswered questions. I think the author needs to be writing a sequel right now since this book has been pushed back. That way come 2021, she can have another book ready to be published filling in the blanks for everything she hasn't resolved.