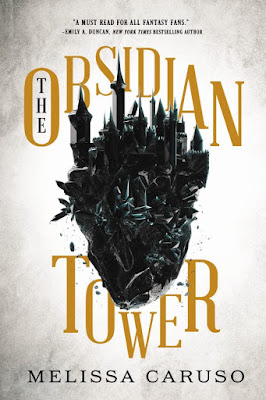 One woman will either save an entire continent or completely destroy it in a captivating epic fantasy bursting with intrigue and ambition, questioned loyalties, and broken magic.

"Guard the tower, ward the stone. Find your answers writ in bone. Keep your trust through wits or war--nothing must unseal the door."

Deep within Gloamingard Castle lies a black tower. Sealed by magic, it guards a dangerous secret that has been contained for thousands of years.

As Warden, Ryxander knows the warning passed down through generations: nothing must unreal the Door. But one impetuous decision will leave her with blood on her hands--and unleash a threat that could doom the world to fall to darkness.

The Obsidian Tower, by author Melissa Caruso, begins a new epic fantasy trilogy called Rooks and Ruins in which the broken magic of one woman will either save an entire continent-or completely destroy it. This story takes place 150 years after the ending of Swords and Fire. The author has created an entirely new cast of characters so you can either choose to read this book first and then go back to the previous series or read the previous series first. Either way it's the same world so it's your choice.

As the granddaughter of an immortal Witch Lord (Lady of Owls) of Vaskandar and a line of Royal Vivomancers, Exalted Ryxander (Ryx) was destined for power and prestige. But a childhood illness left her with broken magic that drains the life from anything she touches, and Vaskandar has no place for a mage with unusable powers. Ryx has resigned herself to an isolated life as the Warden of Gloamingard, her grandmother’s castle. But, Ryx has other plans as well.  As the story opens, she readies to host a peace conference between the Serene Empire, Akevar, and Vaskandar before a war breaks out.

Ryx's country of Morgain lays directly between Akevar and the Serene Empire so they have everything to lose if the peace treaty talks go sideways. To make things more interesting, at Gloamingard’s heart lies a black tower. Sealed by magic, it guards a dangerous secret that has been contained by Ryx's family for thousands of years. When an unwanted visitor gets too curious about the Black Door and what's behind it, Ryx accidentally kills the dignitary in self-defense, activating a mysterious magical artifact sealed in an ancient tower in the heart of her family’s castle. What happens next could unleash a threat that could doom everything she loves to fall to darkness with no hopes of a peaceful solution to a possible war.

Ryx falls in with a group of unlikely magical experts (Rookery) investigating the disturbance in Vaskandar—and Ryx realizes that her family is in danger and her domain is at stake. She and her new colleagues (Asheva, Bastian, Foxglove, Kessa) must take control of the artifact that everyone wants to claim—before it destroys the world. But, with players from all sides chirping in with their approval or suggestions as to what happens next to the artifact, time may be running out until someone reveals Ryx's murder of someone close to the Shrike Lord of Akevar,  time may be running out quickly for Ryx and her new friends.

When Ryx finds a way of subduing her ability to drain life, it's genuinely touching to see her coming to terms with being able to have physical contact. It's also a direct conflict between her family who believes being under anyone's control is unimaginable. There's a fair amount of intrigue between Ryx and her grandmother who is really a center piece to this story and what happens. Much of the story revolves around courtly intrigue and politics as the different kingdoms and the empire vie for power.


As delegations from other kingdoms come to engage in peace talks, Ryx finds a spy in their midst. Courtly intrigue ensues as Ryx also realizes that some of their “allies” are a little too interested in the tower that her family guards. There’s a good amount of diversity in this book as well, with a nonbinary character, bisexual character, and lesbian characters. There is minor romance possibilities in this book as well between Ryx and others, including Severin who really steps up when things get dangerous for Ryx.