#REVIEW - As the Shadow Rises by Katy Rose Pool #YA #Fantasy 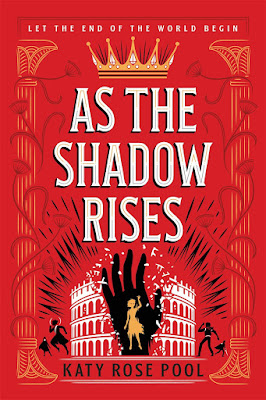 Six of Crows meets Graceling with a dash of Winter is Coming in this second installment of the action-packed and swoon-worthy Age of Darkness series!

In this sequel to the critically acclaimed There Will Come a Darkness, kingdoms have begun to fall to a doomsday cult, the magical Graced are being persecuted and made refugees, and ancient and undead figures walk the land in secret. But with the world hurtling toward its prophesied end, the Last Prophet’s haunting vision reveals the key to stopping the Age of Darkness: finding the long-lost sources of magic taken from the body of a slain god.

When our heroes' paths all cross in the City of Mercy, old wounds are reopened, new alliances are tested, and the end of the world begins. The Age of Darkness trilogy, which the Amazon Book Review called "the next big fantasy series," is perfect for fans of Throne of Glass, Children of Blood and Bone, and An Ember in the Ashes.

As the Shadow Rises is the second installment in author Katy Rose Pool's The Age of Darkness series. For generations, the Seven Prophets guided humanity. Using their visions of the future, they ended wars and united nations―until the day, one hundred years ago, when the Prophets disappeared. All they left behind was one final, secret prophecy, foretelling an Age of Darkness and the birth of a new Prophet who could be the world’s salvation . . . or the cause of its destruction. This is a world where Graces exist: Grace of Heart, Grace of Blood, Grace of Mind, and Grace of Sight.

There is also a pending prophecy that says that key figures will be responsible for the rising of the Age of Darkness or stopping it. The key characters are: Ephyra, the infamous Red Hand killer; Jude Weatherbourne, Keeper of the Word for the Order of the Light; Beru, Ephyra's younger sister who is dying; Prince Hassan who has been pushed aside by his own Aunt; and Anton, the alleged last Prophet. As I did in the previous installment, I shall begin my review with Ephyra.

Ephyra could use her Grace of Blood to heal people, but instead spends much of the novel analyzing her behavior and questioning whether her previous actions make her good or bad. Despite this self-evaluation, she continues down the same path of self-destruction. Her single-mindedness makes for a frustrating hobby rather than an exercise in self-improvement. She chases rumors about The Thief King who corresponded with her own father about Eleazar's Chalice that may be able to save her sister who walked away from her to find her own way. We see a darker part of Ephyra in this book.

She meets up with a group led by Shara to look for the Chalice knowing that her search could lead to her death as well as others. There are plenty of issues. Someone doesn't want the Chalice to be found. The Chalice, if found, could be used as a powerful weapon. The Chalice is the original source of the Grace of Blood which means that Ephyra could fall under its power and help unleash the Age of Darkness. And, it seems, she’s not the only one who wants to find the Chalice. I'm not sure how to take the connection between Ephyra and Illya. He's already betrayed his brother, wouldn't take much to betray Ephyra.

Jude, who is a Grace of Heart which enhances strength, agility speed and senses, faces a tribunal convened to see if he broke the trust and therefore should be removed as Keeper of the Word as an oathbreaker. Jude is now a once-faithful leader torn between his duty and his heart. Jude’s worry that he put too much trust in Hector which weighs him down for a large majority of this story. The negatives are plenty. He goes through a long stretch of story where he wasn’t exactly the most likable character in this book. He fawns, he whines, he loses any ability to use the Pinnacle Blade which is one of the (4) primary artifacts and source of the Grace of Heart until he faces his darkness. The only positive is that he found Anton, the final Prophet.

Anton as the Last Prophet via the Grace of Mind can see the future. He can also locate any living being. Anton, who was betrayed by his own brother Illya to the Hierophant, goes through a lot of growth in this book and learns to accept his role as the Last Prophet. He makes difficult decisions, even if it means facing some of the darkest moments in his life by returning to the place where is brother nearly drowned him or dealing with emotional pain, and his connection to Jude. Anton is best known for being a reckless gambler with connections to the most interesting cast of characters. Anton meets a key character in this book along with Jude. She is called the Nameless Woman. I won’t spoil who she is and why you should pay attention to her. Let’s just say that her role is one that parlays to the final book in this series.

Hassan is a prince exiled from his kingdom but has decided to return home to Nazirah with no real way to get back his throne that the Hierophant and his Aunt stole from him. His mother is missing, and we, as readers, don't know whether she is dead or alive. Hassan is willing to do anything to keep his people safe and reclaim his city, even if it means making some questionable decisions and working with even questionable allies which include his alleged friend Khepri. Even if he must parlay a temporary peace with the Hierophant to find a key piece of the prophecy puzzle to remove his aunt from being Queen. Hassan is Graceless like Beru.

Beru is a dying girl on the verge of giving up. She is a revenant living on the last dregs of her “stolen” life which was given to her by her sister who refuses to let die. She ends up meeting with Hector who is apparently in the same boat as Beru is. Beru tries to atone and make things right and brings Hector along for the ride. But she's a bit on the trusting side. She always has the best intentions at heart and just really wants to atone for her stolen life and leave some good in the world to make up for the bad that she and Ephyra have caused. Beru is allegedly without any Grace but if that were true, who is the fourth person with a Grace?

I am one who thought the ending was both the best part of this book, and the most shocking. Characters from Hierophant, to a long thought dead Necromancer King, to the Nameless Woman are revealed as to who they really are. Anton’s rise as the only Prophet remaining who may be able to stop the Age of Darkness from taking hold still leaves several characters standing on the line between life and death.