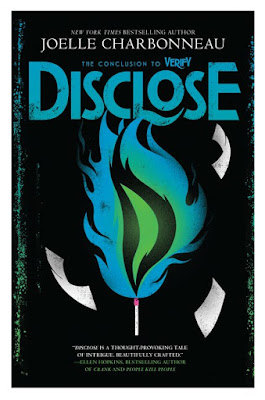 Her mother to a fight much bigger than herself. Her father to grief, fear, and denial. And the truth—to an overbearing government that insists that censorship and secrecy are the only path to peace.

But though Meri and her band of truth-seeking Stewards did lose the first battle in their quest to enlighten the public, they have not yet lost the war.

They’ve learned that society isn’t ready for the whole truth—so Meri is determined to find a way to spoon-feed the public the facts.

That is, if those behind the country’s insidious system of big lies and bogus laws don’t kill her first.

Disclose is the second and final installment in author Joelle Charbonneau's Verify duology. Merriel Buckley aka Merriam Adams, lives in a world where books and newspapers have been eliminated, words, images, and history has been manipulated by the government to control the narrative. Where we used to say Trust, but Verify, but in this world, nobody questions the government's motives. Since joining with an underground rebellion group known as Stewards, Mari's life has been one shocking revelation after another. All she's ever wanted to do is restore censured words to the country.

Now, the Marshal's are searching for Mari after her stunt at the Chicago Navy Pier which lead to numerous Steward's being arrested and sent to so called Unity centers and camps. Her friend Isaac is missing and it is her fault for what happened. Her only hope of surviving is working with her friend Rose Watson and her mother at Gloss. She hopes that a new logo will get the message out to the general public that things must change now. Mari goes one step further. She starts a project where she spray paints her own message everywhere she can.

Then she goes one step further. She decides to get caught on purpose while carrying a recording device to document her step by step journey. After spending (4) days at The Great American Farm, Mari escapes. She discovers some gut wrenching secrets at what happens to those who offend the high masters of the Government. She also finds the boy who was taken away from his family because of her failure. One could say that Mari sets off the first salvo in what's sure to be a major revolution against those who suppressed words, and rewrote history for their own narrative.

For those who haven't read 1984, or lived through the Cold War, may I suggest you read the book as well as bringing Trust, but verify in all you do? Trust, but Verify means that if a friend tells you that Tide Pods are eatable, first, don't believe them, second, ewww, third, do your own research before shoving a toxic substance into your mouth. That goes for Twitter, Facebook, cable news, Google, YouTube and the corporate media masters who want you to nod along with them and accept everything they say as factual. This is not a political speech.  This is from someone who is sick of Fake News and the corporate media's bias and nonsense.