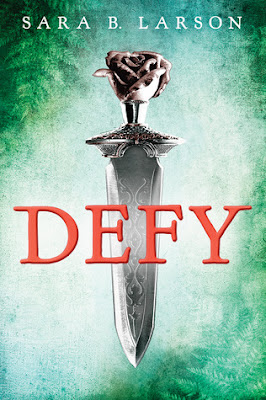 Alexa Hollen is a fighter. Forced to disguise herself as a boy and serve in the king's army, Alex uses her quick wit and fierce sword-fighting skills to earn a spot on the elite prince's guard. But when a powerful sorcerer sneaks into the palace in the dead of night, even Alex, who is virtually unbeatable, can't prevent him from abducting her, her fellow guard and friend Rylan, and Prince Damian, taking them through the treacherous wilds of the jungle and deep into enemy territory.The longer Alex is held captive with both Rylan and the prince, the more she realizes that she is not the only one who has been keeping dangerous secrets. And suddenly, after her own secret is revealed, Alex finds herself confronted with two men vying for her heart: the safe and steady Rylan, who has always cared for her, and the dark, intriguing Damian. With hidden foes lurking around every corner, is Alex strong enough to save herself and the kingdom she's sworn to protect?

Defy is the first installment in the Defy trilogy by Sara B. Larson. The series features 17-year old Alexa Hollen who, after her parents were murdered, cuts off all her hair and disguises herself as a boy named Alex. At Fourteen, she and her brother Marcel joined the king's army where Alexa avoided being sent to the breeding houses. More about the breeding houses later. For three years, Alex grows to become one of the best fighters in all the King's army. Her skills are really second to none thanks to her constant training with her brother, and best friend Rylan.

She quickly rises to the top of the Prince's protection detail where she harbors a mayor secret that if exposed, could jeopardize everything that she's fought for. For the record, I don't have a problem with Mulan like crossing dressing characters. Then again, I do expect them to be a little less emotional at times. I am also appalled by the existence of Breeding Houses. Let's call it what it is. It's a place where soldiers rape young women over and over again until they get pregnant. Sick, disgusting, vile. No further words matter.

Alexa isn't the only one carrying a heavy secret that could ruin them. Damian, the lazy, spoiled-rotten Prince is also hiding some deadly secrets that leads to his kidnapping along with Alex and Rylan. With kidnappers getting closer and closer to Damian, Alex is forced to room with him, and protect him at all costs. This is the point in the story where everything changes. Damian, Alexa, and Rylan are "captured" and taken to a place where even more secrets are exposed, and things change for Alexa.

So, let's get right to another one of my dislikes; love triangles. Two men secretly hold the fact that they know who Alexa really is; Rylan and Damian. For 3 years, one of them has known her secret and kept it hidden from the rest of the Prince's guards. The Prince himself, apparently, knew as well but once again, kept his mouth shut because Alex had more than proved "himself day in and day out. So, where does that leave Alex? Does she end up falling for the best friend who kept her secret? Or, does she fall for the Prince? You'll have to continue reading the series in order to find out.

Defy is definitely one of those stories that crosses a whole lot of territory, and may make some readers uncomfortable with the addition of breeding houses. It definitely was not one of the highlights I will look back on with fondness. It is a surprising story in that Alexa is able to hide her identity so well. Or so she believes. I have to say that I really, really liked Alexa. She's more than able to excel among the men she serves with. She rises quickly to the top of the ladder, and would be the Captain of the Prince's guard were she not so young.

She's more than capable with a sword, and is nearly unbeatable with a bow and arrow. She's often put in charge of testing new recruits where she quickly shows why she's one of the best around. My only, only regret is that Larson falls into the trap of providing readers with a twisted triangle of doom. I know where I stand on who I would choose, but that's because I am a bit behind on the series. There is a whole lot more to to say about this story, but I'll stop for fear of using spoilers. This is a story filled intrigue, mysteries, a scary sorcerer, and a King out of control. I will be continuing this series.